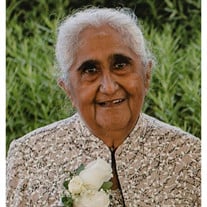 Champaben Jayantilal Tailor (nee Darji) was born on April 17, 1939 in Vyara, Gujarat, India. As a child, she was a very bright student and although there was no high school in the village, with kind consideration of her maternal uncles in Vyara, she traveled to complete high school. With the continued support and encouragement of her late Zinamama, she achieved the highest graduation of master’s from Gujarat University in Ahmedabad, Gujarat. After graduating, she took a position as a teacher at Vankaner Kanya Shala, where she had completed her primary school. Champaben migrated overseas and settled with her husband Jayantilal in England. Most of her time in England was spent living at Henrietta Place, Ashton Under Lynes, where she raised her family. She migrated to the United States in May of 1982 and lived a very happy and full life in Nutley, NJ. While in the US, Champaben welcomed her grandchildren Kishan, Jarissa, Divya, Priya, Josiah, and Haili. She loved learning, traveling, and exploring, especially when it included sharing her knowledge and experiences with her loved ones. Always very active, Champaben kept in touch with her family and friends daily until her passing. She passed peacefully in the company of her grandson’s wife, Stefani. She will be dearly missed. Champaben is survived by her brothers Navin and his wife Kaushalia, Dhiraj and his wife Lopa; sons Shailesh and his wife Amrapali, Jithandre, Bhavna, and Rajesh and his wife Krishna; her seven grandchildren; and a large, loving extended family. Viewing will be held at Ippolito-Stellato Funeral Home in Fairfield, NJ on Sunday, December 6th from 10-1pm. Family will meet at the funeral home on Monday, December 7th at 10am with a processional to East Ridgelawn Cemetery in Clifton, NJ where cremation will be held at 12pm. We understand that during these times, not everyone is able to travel to attend services. We appreciate your kind messages and will hold a smaller prayer service in her honor in 2021 once it is safer to gather.

Champaben Jayantilal Tailor (nee Darji) was born on April 17, 1939 in Vyara, Gujarat, India. As a child, she was a very bright student and although there was no high school in the village, with kind consideration of her maternal uncles in Vyara,... View Obituary & Service Information

The family of Champaben Jayantilal Tailor created this Life Tributes page to make it easy to share your memories.