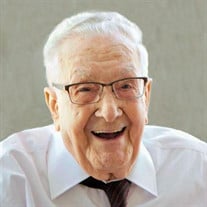 Corrado Salvemini May 2, 1926 - April 11, 2021 Corrado Salvemini, 94, of Caldwell, New Jersey, passed away peacefully on April 11, 2021, surrounded by family. Corrado was born in Molfetta, Bari, Italy on May 2, 1926. He married the love of his life, the late Maria (Garofalo) Salvemini, who he was married to for over 35 years. Corrado worked as a mechanic in Italy and Venezuela before immigrating to the United States and residing with his family in Hoboken, New Jersey. In 1969, Corrado moved to Union City, New Jersey, where he resided for 37 years before moving to Caldwell, New Jersey where he lived independently and loved to cook, until he passed. Corrado retired from L.J. Kennedy Trucking, in Kearny, New Jersey, in 1992, where he worked as a diesel truck mechanic. Son of the late Pasquale and Domenica (DePalma) Salvemini. Corrado is survived by his daughter, Anna Marie and her husband Vincent Picariello; his son, Pasquale and his wife Martha Salvemini; his grandchildren, Jennifer-Ann Picariello, Maria Salvemini and her husband Joseph Schiazza, Maria Picariello, and Corrado Salvemini; his sister, Antonia Allegretta; his brother, John and his wife Vera Salvemini; his sister-in-law Laura Garofalo; as well as many nieces and nephews. Corrado will also be reunited with his sister, the late Rosetta (Salvemini) and her husband Saverio Grillo; his brother-in-laws Francesco Allegretta and Vitantonio Garofalo; his sister-in laws Antonia (Garofalo) and her husband Vito Tattoli, and Clotilde (Garofalo) and her husband Franco Minervini; and many cousins. Corrado’s memory, love, preference for homemade food, and taste for fine vino will live on through his family and those whose lives he’s touched. Visitation will be held on Thursday from 9:30-11:30AM at Ippolito-Stellato Funeral Home - Fairfield, 7 Two Bridges Road, Fairfield, NJ 07004. A Mass of Christian Burial will be held on Thursday at 12Noon at Saint Thomas More R.C. Church, 12 Hollywood Avenue, Fairfield, NJ 07004. Due to the COVID-19 pandemic, masks and social distancing will be required. In lieu of flowers, donations in Corrado’s honor may be made to Shriners Hospital for Children or the Make a Wish Foundation. A live stream of the funeral mass can be seen here: https://fb.me/e/2eQc1pZh4

The family of Corrado Salvemini created this Life Tributes page to make it easy to share your memories.