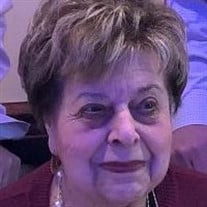 Diana Burggraf, 97, of North Bergen, NJ passed away peacefully in her home, on April 7th, 2020. Diana (Anahid) was born on March 28th, 1923, to her parents Antreas and Seranoush Minasian. She was the dear wife to the late Raymond H. Burggraf. She was the loving mother to her two sons, Raymond Drew and his wife Barbara, and Gary and his wife Andrea. She was an adoring sister to Julliet and her husband Robert Borgersen. Diana was an incredible grandmother to Drew, Michael and his wife Shannon, Gary R., and Samantha. She was also the caring aunt to Andrew Borgersen and his wife Heather, and Renee Johnson and her husband Erik. She was cherished and loved dearly by all of her family and friends. Diana graduated from Memorial High School in West New York, and then continued her education at Webster Business College. She worked for Hudson Trust Company as the administrative secretary to the executive Vice President for 20 years, and it was there where she met her husband Raymond. They were married at Holy Cross Armenian Church in Union City, NJ in 1960. Driven by her Christian faith and spiritually, Diana was a proud and devoted member of Holy Cross, where she served on the Women’s Guild and Parish Council as chairperson and other roles over her lifetime. As a loyal pillar of her church, Diana was recognized many times for her dedicated service. She was named “Woman of the Year” in 1993 and again in 1997. She was the recipient of “The Women of Wonder Appreciation Award” in 2014 by the Eastern Diocese of the Armenian Church. Also, in 2016 she was named one of the special honoree’s at the 110th Anniversary Celebration of the Holy Cross Armenian Church. She was presented with the prestigious Pontifical Encyclical from the Arch Bishop at that event. She loved watching her soap operas, talking to her friends and cooking for her family. The Easter season was always special to Diana as she and her friends prepared for their Annual Church Lenten Luncheon. Her summer days were filled with tireless hours working at the Holy Cross Rummage Sale, and by the fall season she was immersed in planning for the upcoming church bazaar. Diana also loved celebrating the holidays with her family. Each season brought upon a new meaning and endeavor in her life. Diana’s beautiful and long life was filled with insurmountable love, precious memories and an unmatched devotion to God, her faith and her family . There will be a private viewing for the immediate family followed by burial at Grove Church Cemetery in North Bergen. We are looking forward to celebrating Diana’s extraordinary and accomplished life with her family and friends at a later time. In lieu of flowers, donations may be made in Diana’s memory to “Holy Cross Armenian Church”. Holy Cross Armenian Church, 318 27th Street, Union City, NJ 07087

Diana Burggraf, 97, of North Bergen, NJ passed away peacefully in her home, on April 7th, 2020. Diana (Anahid) was born on March 28th, 1923, to her parents Antreas and Seranoush Minasian. She was the dear wife to the late Raymond H. Burggraf.... View Obituary & Service Information

The family of Diana Burggraf created this Life Tributes page to make it easy to share your memories.