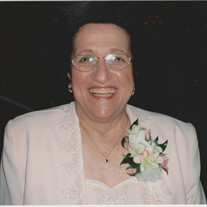 Farkhondeh Hakimi was born in Mazandaran, Iran. She was raised in Sari with her five sisters and her brother. She went on to start her own family there later in life. Mrs. Hakimi was very active in the Baha’i community in both Iran and the United States as a member of the Local Spiritual Assemblies and served on various committees. In Iran, she proudly hosted events at her home for multiple Hands of Cause who visited the area. She had a lovely home in Sari with her husband Mohamad Taghi Hakimi. Together, they raised two daughters until his unexpected death - she was just 38 years old at the time. Mrs. Hakimi remained in Iran until the Revolution at which time she was forced to start over in the United States via religious asylum. She spent the last 40 years sharing time between her daughters’ homes in West Caldwell and Cherry Hill, NJ. In 2016 her medical condition had declined and she needed full-time care. She was moved to West Caldwell Care Center where family and friends visited her almost daily to spend time with her and to celebrate various events. By this time she had already met all 10 great grandchildren and had the ability to hold them in her arms and watch them grow. This was something which she cherished. Mrs. Hakimi enjoyed cooking, baking, knitting, needlework, gardening, and spending time with family and friends. As her trademark, she gifted her needlework to newborns in her life. She also took great pleasure teaching & chanting prayers and Baha’i songs to all the kids around her. During her younger years she spent a great deal of time traveling internationally between Iran and the United States, then later between various states and Canada, to be with family. When help was needed, she was great support emotionally, mentally and physically. Survived by a tremendous legacy of 2 daughters, 1 son-in-law, 5 grandchildren and 10 great grandchildren, countless nieces, nephews, grand & great grand kids of extended families, countless friends and family that sincerely consider her "Mamanee", "Khaleh Jan", "Ameh Jan", “Zan Amu”, or “Zan Da’i”. Mrs. Hakimi’s love has been spread to so many and we are blessed to have had her in our lives. Surrounded by so much love to the end, Farkhondeh Hakimi passed away peacefully, September 29, 2019, with her loving family by her side. She was 92 years old. She always told her family that she was born a Baha’i, lived her life as a Baha’i, and will enter Abha Kingdom as a Baha’i. Her spirit and teachings will live on in all those she loved and who loved her. Friends will be received Saturday, October 5th, 9-11AM, at the Ippolito-Stellato Funeral, 7 Two Bridges Road, Fairfield. Followed by burial at Laurel Grove Cemetery, 295 Totowa Road, Totowa. In lieu of flowers, you may donate to one of the following causes in her name if you choose. Baha'is Only: National or International Bahai Fund, JDRF NJ Metro: to support her great-grandson Zach's fundraising for the Juvenile Diabetes Research Foundation, Tinyurl.com/superzachJDRF2019 or American Heart Association: Mrs. Hakimi has lost many loved ones to heart disease.

Farkhondeh Hakimi was born in Mazandaran, Iran. She was raised in Sari with her five sisters and her brother. She went on to start her own family there later in life. Mrs. Hakimi was very active in the Baha&#8217;i community in both Iran... View Obituary & Service Information

The family of Farkhondeh Hakimi created this Life Tributes page to make it easy to share your memories.

Farkhondeh Hakimi was born in Mazandaran, Iran. She was raised...