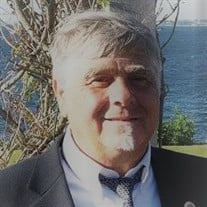 George Minisci, 73, passed away peacefully August 16, 2019 with his loving daughter Lauren and her husband Richard van Riet by his side. A longtime resident of Bayonne, NJ, he was married to his beloved wife Helene (nee Levendusky) for 42 years until her death in January of this year. Born February 13, 1946 in San Cosmo Albanese, Italy, George moved to Brooklyn, NY at the age of 13. He earned his MBA from NYU, and worked at the New York City Office of Management and Budget until he retired in 2010. Post retirement, he worked at Intercruises in Bayonne. An avid soccer fan, referee, and coach, George was actively involved in the Bayonne Youth Soccer and Northern Counties Soccer Associations. He was a board member of the Society of Saints Cosmo and Damian and volunteer at St. Henry’s R.C. Parish. Quite the story teller, George’s infectious laugh made it impossible to not smile whenever you were around him. He enjoyed making wine, cooking, gardening and travel – and would visit his family in Italy as often as possible. George is pre-deceased by his mother, Maria Antonia, father, Francesco Minisci and daughter, Marisa Minisci. He is survived by siblings Pietro Minisci, Cosmo Minisci, Maria Godino, and Domiano Minisci, as well as nieces and nephews, Francesca Minisci, Lorenza Minisci, Francesco Godino, and Cosmo Godino. A celebration of George’s life will be held Thursday, August 22 from 4:00pm – 8:00pm at Caiola-Stellato Funeral Home, 691 Avenue C, Bayonne, NJ. A mass will be held Friday, 10:45am at St. Henry’s R.C. Church, also in Bayonne. In lieu of flowers, the family asks that you make a donation to St. Jude’s Children’s Hospital

George Minisci, 73, passed away peacefully August 16, 2019 with his loving daughter Lauren and her husband Richard van Riet by his side. A longtime resident of Bayonne, NJ, he was married to his beloved wife Helene (nee Levendusky) for 42... View Obituary & Service Information

The family of George Minisci created this Life Tributes page to make it easy to share your memories.