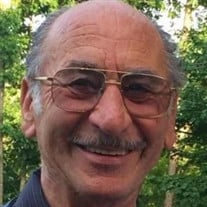 Gerard (Jerry) Rotonda Jr., 84 Longtime Newark Firefighter Gerard (Jerry) Rotonda Jr. of Daytona Beach Shores, Florida and Fairfield, New Jersey, passed away from complications related to COVID-19 on Sunday, April 5, 2020, at St. Barnabas Medical Center, Livingston, NJ. He was 84 years old. He was the beloved husband, for 50 years, of the late Dr. Anna Marie (Goione) Rotonda, former Mayor of Fairfield, NJ. The youngest of three children of the late Gerard and Columbia (Sibilia) Rotonda, Jerry was born on January 1 (New Year’s Day), 1936, in Newark, NJ. He was predeceased by his sisters, Marie Negri and Anna Casola. He was a cherished father to his five children: Jennifer Rotonda of Fairfield, NJ; Anna Marie Strand (husband David) of Chatham, NJ; Yvonne Smogard (husband David); Gerard Rotonda III (wife Edna); and Lauren Barbelet (husband Kevin) of Blauvelt, NY. He was adored by his twelve grandchildren: Jennifer Jones, Allen Jones, Michael Strand, Gianna Strand, Alexandra Barbelet, Stephen Barbelet, Joseph Smogard (wife Grace), David Smogard, Noel Smogard, Vincent Smogard, Chloe Rotonda, and Charlotte Rotonda. Jerry proudly served in the United States Army from 1955 to 1957 and was called back to duty in 1961. Upon discharge in February 1962, he was employed by the Garden State Sausage Company, and the Coca-Cola Company, and he partnered at the 7-Up Bottling Company of Essex. Jerry became a firefighter with the City of Newark, NJ, where he worked at Truck 10, Truck 6, and the Fire Boat, from 1970 until his retirement in 2000. Throughout the years, his passion was riding motorcycles, and he was a proud member of the Blue Knights Law Enforcement Motorcycle Club. A celebration of his life will be held at a later date. Donations may be made in memory of Gerard Rotonda Jr. to the Michael J. Fox Foundation for Parkinson’s Research, P.O. Box 5014, Hagerstown, MD 21741-5014, or at michaeljfox.org/donate.

The family of Gerard Rotonda created this Life Tributes page to make it easy to share your memories.