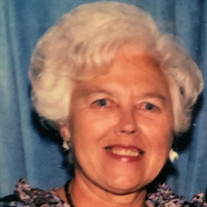 Gloria (nee Scott) Hopf, 99, of Lyndhurst, New Jersey, passed away on Wednesday, December 9, 2020. Beloved wife of the late Charles F. Hopf. Loving mother of Nancy Villepigue, her late husband James R. and current partner Joe Barrera, Joyce Baratta & her husband Anthony and Kathleen Hopf. Cherished grandmother of Deborah Villepigue & her husband Louie, James Villepigue & his wife Heather and Joseph Baratta & his wife Caroline. Adored great-grandmother of Sienna, Kaiya, Colton, Natalie and Wyatt Villepigue and Isabella, Giuliana and Alessandra Baratta. Dear sister of Kenneth Scott and the late Gladys Hoagland, Joseph & Richard Scott. Mrs. Hopf was born in New York City. Shortly after her birth her family moved to Bergenfield, NJ where she lived for several years before moving to Jersey City and then to Lyndhurst. She worked as a Car Repair person for the Pennsylvania Railroad. She was also a Slip Factory Supervisor and a Nurse's Aide. She was a member of the Emblem Club #72 of the Elks in Lyndhurst for over 35 years, sat on the Lyndhurst Health Department, Member and Chaplain as well as past President of the Ladies Auxillary of the Lyndhurst Fire Department, she started the hospitality "Canteen" program for the firemen on site at fires, was a charter member of AARP #4319 as well as former Recording Secretary and twice served as President of the Friendship Seniors and assisted on many of their committees. She was a founding member and past president of the R.E.C. program and served several years as president and on the Board of Directors of the Friendship House in Hackensack. Mrs. Hopf, along with her husband, ran the Democratic headquarters each year and was county committee woman for the Democratic party. She was honored by Mayors Stellato, Gagliardi, Guida and Shuber and Senator Ambrosio as Senior Citizen Volunteer of the year for many years. Mr. and Mrs. Hopf managed "The Food Farm" food bank for Lyndhurst, worked the Sacred Heart Food Pantry, served as a fundraiser petitioning the construction of the Sacred Heart School and was responsible for petitioning the erection of the Senior Citizens Building in Lyndhurst. Funeral Monday 9AM from the Ippolito-Stellato Funeral Home, 425 Ridge Road, Lyndhurst. Funeral Mass 10AM Our Lady of Mt. Carmel R.C. Church. Interment Holy Cross Cemetery. Friends will be received Sunday 2-6PM. In lieu of flowers donations may be made to NJ Friendship House, Attn: Development Department, 125 Atlantic Street, Hackensack NJ 07601.

The family of Gloria Hopf created this Life Tributes page to make it easy to share your memories.