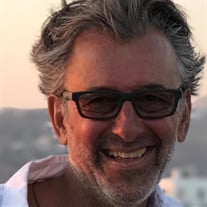 The most wonderful man in the world took his biggest trip (To Megalo Taxidi) on Sunday, December 26, 2021. Yanni fought with all his heart and might, almost more than humanly possible, but finally succumbed to a relentless cancer. He was surrounded by his family and left in peace and is now protecting us all from above. Anyone who knew Yanni, be it his closest of friends and family, to those with only one encounter have echoed the exact same sentiments “Yanni was a special man, always kind, always smiling, always thinking of others before himself”. He just wanted to make everyone else happy. All adored him and loved him. Yannis was born in Pyrgos, Greece on February 12, 1954. His favorite childhood memories are of his summers in his family’s home village of Kato Samiko in Peloponnesos. His working career began in the travel industry in Athens, and on a whim one night a friend asked him to come to the US to oversee his travel operation in Washington D.C. which brought him closer to us in the early 80s. After a very successful running of the company, he was invited by his future father-in-law (unbeknownst to anyone at the time) to come to NYC to join his company, Tourlite International. That’s where he met his future wife, Valerie. Yanni was a tireless, successful, respectful and respected gentleman who was admired by all in the travel industry both here and abroad. His life was dedicated to his family, always putting his wife and children Isidora and Niko first. As a husband, Yanni gave of his entire being. It was always, whatever Valerie likes. He adored her and was her true partner. He was a hands-on father, always guiding and teaching his children to be more complete people, to take care of others and find joy in the happiness of the people around, to trust themselves, be confident, strong and to treat everyone with the same respect. That was Yanni! He had a special bond with all his family, especially his cousins Angelo and Kosta, who were like brothers to him. His extraordinary respect for his in-laws, Nicholas and Thalia Athans, was admired by all. He would always say “Whatever you want”. He travelled many places in the world and was able to experience a rich and full life before it was taken so early. Thankfully, he was given the gift to make one last trip this past September with Valerie to his beloved Greece, where he spent time with his daughter, Isidora, went to his home village to visit with all his family, stayed in his seaside home in Vouliagmeni, which became his newly adopted home, and visited family and friends in Athens for one last time. Yanni was able to take his son, Niko, to begin his freshman year at the University of Michigan and even take a trip for parents’ weekend in early November. It was another blessing for him and his family. Yannis is survived by his wife, Valerie, daughter Isidora, son Niko, sister Vanda, Mother-in-law, Thalia Athans, Sister-in-law Maro Doundoulakis and husband Jim, with children Thalia and James. His last words to Niko were “I Love You More” There will be a Memorial Service and time to visit with the family on Thursday, December 30 from 4pm – 7pm at Hunt-Stellato Funeral Home, 1601 Palisade Ave. Fort Lee, NJ US 07024 In lieu of flowers, donations may be made in his memory to Memorial Sloan Kettering Cancer Center. https://secure2.convio.net/mskcc/site/Donation2?df_id=17137&mfc_pref=T&17137.donation=form1&utm_source=MSKCC&utm_medium=referral&utm_campaign=triple_your_impact202112_2021&utm_content=NAV_DON_FN_PDN_BT

The most wonderful man in the world took his biggest trip (To Megalo Taxidi) on Sunday, December 26, 2021. Yanni fought with all his heart and might, almost more than humanly possible, but finally succumbed to a relentless cancer. He was surrounded... View Obituary & Service Information

The family of Ioannis Papaioannou created this Life Tributes page to make it easy to share your memories.

The most wonderful man in the world took his biggest trip (To...