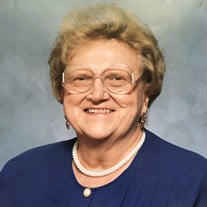 Irene (nee Podhaisky) Legawiec, 93, of Fairfield, New Jersey passed away on Thursday, July 22, 2021. Beloved wife of the late Edwin Legawiec. Loving mother of Bruce & his wife Debbie Legawiec, Lois & her husband Jeff Volyn, and the late Dr. Barry Legawiec. Cherished grandmother of Staci (Frank), Nick, Eddie, Julian (Jess), Chelsea, & Harrison. Adored great-grandmother of Ailia, Luke, Owen, & Emily. Dear sister of the late Ann Mikulak, Walter Podhaisky, & Nick Podhaiski. Endeared aunt of Alice, Jean, Walter, Vera, Nick & Joe and the late Martha, Barbara, Richard and Cookie. Also survived by many great nieces & nephews. Except for a few years on a farm in Ringoes NJ, Mrs. Legawiec was raised primarily in Greenpoint, Brooklyn. While there she received her nursing degree from the Bushwick Hospital school of Nursing in 1949 and later went on to receive her RN. After getting married in 1953, she moved to NJ and raised her family in Fairfield, where she made many friends and was involved in many activities, notably being the West Essex Chapter president of CARIH, a hospital her son Barry had been at for 2 years. She had been a Parishioner of Holy Cross Polish National Church. Her greatest joy in life was spending time with her loved ones, and her love, strength and positivity was felt by all. Funeral Thursday at 9AM from the Ippolito-Stellato Funeral Home, 7 Two Bridges Road, Fairfield. Funeral Mass Thursday 10AM at the Holy Cross Church, 220 Browertown Rd., Woodland Park. Interment Laurel Grove Cemetery. Friends will be received Wednesday, 4 -7PM. Donations may be made to National Jewish Health, P.O. Box 17169 Denver, CO 80217-0169 or donate.national jewish.org. Send condolences to stellatofuneralhomes.com

The family of Irene Legawiec created this Life Tributes page to make it easy to share your memories.