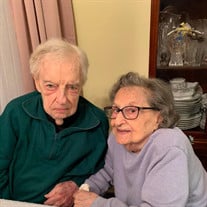 Jane Sheehan (nee DeNicola) , 93, of Upper Montclair, New Jersey passed away on Saturday, May 14, 2022. Beloved wife of the late Thomas F. Sheehan. Loving mother of Beatrice Miller & her late husband David and the late Mary Jane Sheehan. Dear mother-in-law of Corey Schneider. Cherished grandmother of Michelle & her husband Andrew Rogin, Melissa Miller, Michael & his wife Kate Miller and Lindsay Schneider & her husband Gregg Turek. Adored great-grandmother of Emily, Jordyn, Kenzie-Jane and Lexi-Grace. Endeared sister of Beatrice Bolella, John "Jack" DeNicola, and the late Dominick DeNicola, Josephine McDade, Frank DeNicola and Joseph DeNicola. Jane worked in the Advertising Department at McGraw-Hill, Inc. in New York City for over 25 years before retiring. She was a force to be reckoned with. She met the love of her life at 13 years old. Because he was Irish her parents considered him “off-limits”. But she was determined to be with him, so she did. And for 72 happy years he was her “boyfriend”. They raised 2 daughters and built a life to be envied. Her natural habitat was ShopRite but on Saturdays she could also be found at Pathmark, Kings, A&P, and Foodtown followed by the DollarStore and 5:30pm Mass. She was renowned for epic Sunday dinners with 6 main dishes, 17 side dishes and 20 people. Her home-made chicken soup was known for curing all illnesses and even managed to make cold, rainy days somewhat enjoyable! Though she never drank, her grandson’s wedding introduced her to Verdi and a whole new world opened up. She loved having a glass with her grand-daughter any chance she could. The matriarch of her family, and a true friend. Everyone who met her instantly fell in love even if they only met her once. Generous to a fault, she was always looking out for her siblings and taking care of her husband, daughters, grandchildren and great-grandchildren. But, tough as nails, she was never one to be taken advantage of! She will be remembered for her strength, wisdom and generosity. We take solace knowing she is reunited with her husband where she wanted to be. And we look forward to the day we will be reunited with both of them. Friends will be received Wednesday 8AM-9:30AM at the Ippolito-Stellato Funeral Home, 425 Ridge Road, Lyndhurst. Funeral Mass Wednesday 10AM St. Cassian Church, Montclair. Interment Holy Cross Cemetery.

The family of Jane Sheehan created this Life Tributes page to make it easy to share your memories.