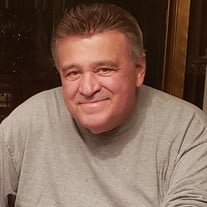 Joe Marangi had a smile that would light up a room. Although he was quiet, his presence was always known. He took so much joy in spending time with his family whether it was a holiday, a last minute get together, or a simple drive for coffee with his wife Tina. Joe was born on September 20, 1952 in Orange, NJ to his parents, Donato and Yolanda Marangi (Tee & Lan). He grew up in East Orange and started working for his family’s sanitation business alongside his father and his older brother. He met his wife Tina in East Orange at a Saint Joseph’s school dance at the age of 16. They married 4 years later and moved to Newark, NJ into an apartment above his in-laws, Domenico and Maria Aveni. They immediately started building their family together. In 1976, they purchased their forever home in West Caldwell, NJ where they raised their four children. Joe worked tirelessly to give his family the best life he possibly could. He and his wife Tina raised their kids with a strong foundation built on love, and their close bond remains today. As his children grew up and got married, he embraced their spouses as children of his own. Joe was a “jack of all trades” who was always willing to lend a helping hand to his kids. His son and sons-in-law learned so much from him throughout the years. Joe passed suddenly on April 22, 2020 at the age of 67. He is survived by his wife of nearly 48 years, Tina, and his children, Marisa Rizzo & her husband Frank, Angela Van Houten & her husband JJ, Anthony Marangi & his wife Lori, and Victoria Silva & her husband Rui. He was the proud grandfather of his 11 beautiful grandchildren, Nicole, Frankie & Michael Rizzo, Jackie, John, Joe & James Van Houten, Gianna & Nicholas Marangi, and Stella & Dante Silva. He leaves behind his older brother Dominick Marangi (predeceased by sister-in-law Markes Marangi), his sister-in-law Rosalinda Aveni, and five nephews Dominick, Michael & Sal Marangi, and Nick & Vinny DeNicola and their families. Even though his heart of gold stopped beating too soon, the memories of love and happiness will remain with his family forever. Due to the current situation, there will be a private viewing for immediate family only. In lieu of flowers, we ask that you make a donation in his name to the Saint Jude’s Children’s Hospital at stjude.org.

Joe Marangi had a smile that would light up a room. Although he was quiet, his presence was always known. He took so much joy in spending time with his family whether it was a holiday, a last minute get together, or a simple drive for coffee... View Obituary & Service Information

The family of Joseph Marangi created this Life Tributes page to make it easy to share your memories.

Joe Marangi had a smile that would light up a room. Although...