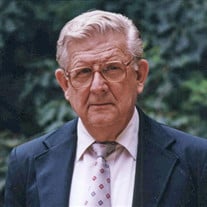 Dearest husband, father, grandfather, great-grandfather, served in Army On Sunday, April 4, 2021, Joseph Padykula passed away peacefully at his home in Fairfield, New Jersey. He was 92. Joseph was born on April 17, 1928 in Passaic, New Jersey to Stanislaw & Weronika (nee Maciag) Padykula. Joseph grew up in Garfield, New Jersey. He served in the Army from 1946-1947. Because of his experience with ham radio, he was selected as a radio repairman working in the office of General MacArthur. He graduated from Newark College of Engineering (now NJIT) with a B.S. in Mechanical Engineering and then began his 34 year long career at Picatinny Arsenal in New Jersey until his retirement. Joseph married Frances Cicela on August 17, 1957 and moved to their home in Fairfield, New Jersey. Together with their three children James, David and Jane they built a beautiful life, especially on their memorable road trips across America. His greatest joys included home improvement projects, reading, history, big band music, and most of all his family. He is survived by his beloved wife Frances Mary Padykula (nee Cicela) of 63 years; his son James & his partner Beth Priday of Bloomingdale, New Jersey; son David & his wife Wendy of Fairlawn, New Jersey and their children Elizabeth Reihl and Rebecca and their granddaughter Maeve Reihl (Joseph's great-granddaughter); daughter Jane & her husband Mark of Rockaway, New Jersey and their children Katherine, Scott and Carolyn. Joseph was predeceased by his brother Edward Padykula. Joseph was a kind, intelligent, and gentle man with a great sense of humor. He leaves behind a lasting mark on all who knew him but especially his family. He will be greatly missed. Funeral Mass Friday 11:30 AM at St. Thomas More R. C. Church. Interment Gate of Heaven Cemetery. Arrangements under the direction of the Ippolito-Stellato Funeral Home, 7 Two Bridges Road, Fairfield. Donations may be made to Rosemarie's Rescue Ranch, PO Box 3191, West Caldwell NJ 07007 or North Jersey Community Animal Shelter, 23 Brandt Lane, Bloomingdale NJ 07403 or Warwick Valley Humane Society, PO Box 61, Warwick NY 10990.

The family of Joseph Padykula created this Life Tributes page to make it easy to share your memories.