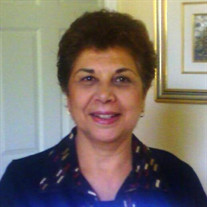 Josephine “Giuseppa” Lavista was born on June 11, 1943 in Forino, prov. Avellino, Italy, the eldest child of Giorgio and Annunziata Soda. She was raised on a large family estate in a home that was built by her grandfather and shared by her father, aunt and grandmother. In addition to helping with her younger siblings, Josephine helped her father run the family business making flour. Though life wasn’t easy in post WWII Italy, her experiences, nevertheless, taught her the importance of family, hard work and using the assets available to her. Living the simpler life, Josephine gained her appreciation for nature, being surrounded by beautiful gardens and orchards, and realized her love of animals. Throughout her childhood opportunities, Josephine mastered the many artisanal skills, including sewing, cooking, knitting and gardening, that would later serve her well in her adult life. She came from a long line of strong, determined woman; Josephine proved to be the toughest and most determined of them all as she carried all of the skills and qualities she learned as a child to her new land of opportunity. Even though receiving a higher education was not an option for her as a young woman growing up in a small Italian village, her fierce work ethic propelled her to work hard in her new country so that she could provide more opportunities for her own children. Josephine enjoyed sharing the story of her journey to the United States. Her “sweet sixteen,” as she recounted to her granddaughters, was spent saying good-bye to her Italian family and friends and embarking on an eleven day transatlantic journey with her mother and five siblings: Michael, Autilia, Carmela, Anna and Nick, who affectionately call her “Pina.” When Josephine and her family arrived in “America”, they were greeted by their father who settled the family into a modest apartment on Frederick Street in Belleville, NJ. Josephine quickly took a job at a local factory to help with the family expenses and also attended night school to improve her English. It was there that she met her husband, Armando, and the many friends that she and Armando made and have known for nearly 60 years. Josephine and Armando married on December 6, 1964. They both worked tirelessly so that they could realize their first American dream of owning their own home that they purchased on Plenge Street in Belleville. Soon thereafter, Josephine and Armando welcomed two children, Donna and Rocco. Being a new mother did not stop Josephine from working hard. Indeed, it only made her work harder as she had big plans for her children. In the mid-1970s, Josephine and Armando began a business together in Fairfield that included making luxury window treatments - fine curtains and draperies Josephine made on her sewing machine. Soon after, they moved the family to Fairfield so that they could spend more time with their children while growing their business. When it was time to give up the family shop, Josephine would go on to work at Fortunoff, where she was employed for over ten years. She worked long hours as a top sales associate while also tending to her four granddaughters, Jacqueline, Erica, Amanda and Dana. Josephine never could not sit still, as they say; when her job at Fortunoff came to an end, she insisted on taking a part time job at the Chelsea to keep herself busy. While work was always a tremendous source of pride for Josephine, nothing was more important than her family. In 1998, Josephine and Armando moved to Montville where Josephine built her dream home. For her, a dream home meant a large kitchen and dining room with a dining table big enough to accommodate her growing family. Josephine loved to cook and insisted on Sunday dinners, an important weekly tradition to be able to round up her family around one table. Not surprising, there was even a seat at the table reserved for the family dog. Josephine also hosted countless Christmas Eve dinners - keeping up the long tradition of the seven fishes - served to extended family and friends. She cared deeply for everyone in her family, including her siblings and many nieces and nephews. She was the “go to” matriarch of the Sodas. Josephine had many passions. She loved babies and children. You would often find her knitting a blanket or baby clothes. She was also an avid gardener—her homes were always adorned with beautiful flowers. She was also known to feed and create shelters for homeless kittens. Josephine will always be known for her compassion, her relentless energy, her loyalty to family, friends and co-workers. She was incredibly proud of her children and grandchildren but never bragged. She supported many charities that benefitted women, children and animals. She was witty and sharp. She was kind, but tough, honest, and wholeheartedly selfless. She is an irreplaceable wife, mother, grandmother, sister, aunt, and friend who will be missed deeply. Funeral Tuesday 9AM at the Ippolito-Stellato Funeral Home, 7 Two Bridges Road, Fairfield. Funeral Mass 10AM St. Thomas More R.C. Church. Friends will be received Monday 2-4 & 6-8PM. In lieu of flowers donations may be made to St. Jude Children's Research Hospital, 501 St. Jude Place, Memphis TN 38105.

Josephine &#8220;Giuseppa&#8221; Lavista was born on June 11, 1943 in Forino, prov. Avellino, Italy, the eldest child of Giorgio and Annunziata Soda. She was raised on a large family estate in a home that was built by her grandfather and shared... View Obituary & Service Information

The family of Josephine Lavista created this Life Tributes page to make it easy to share your memories.