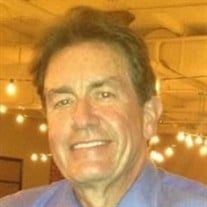 Mike Treacy of Scituate MA, died suddenly September 19, 2020 at age 68. He is survived by his wife, Marsha Treacy, his son Brendan Treacy & wife Amy, his daughter Erin Treacy Totino & husband Vito, his step daughter, Lilli, and stepson, Michael. He was the joyful grandparent to his three grandchildren: Eliana, Sofia, and Oliver. His parents, Julie and Harold, predeceased him. Born in Brooklyn, Mike grew up in Waldwick NJ and went on to college at his beloved Seton Hall. He then attended Western Michigan University where he earned his law degree. Mike went on to practice real estate law in New York City, Chattanooga TN (Husch Blackwell) and finally, Quincy MA where Mike was a Director of Real Estate Law at Ahold USA (known locally as Stop and Shop). Mike will be remembered for his quick mind, his storytelling, his passionate devotion to the New York Yankees, his love of fine wine, and his adventurous travels with Marsha, family and their many friends. He was a devoted Dad to Brendan, Erin, Lilli, and Michael and a besotted grandfather. Mike was a master of trivia and excelled at musical trivia, handily beating any and all competitors. No one knew more fifties and sixties rock and roll lyrics than Mike Treacy. Against incredible odds, Mike survived a stem cell transplant (lymphoma) several years ago and returned to his active, vibrant and wholly intense self in 2018. It was not unusual for Mike to start the day with a tennis game, move onto a round of golf, and end the day surrounded by family and friends on the deck of his home overlooking the Scituate Country Club 5th hole. Among the many highlights of Mike’s life were his annual golf getaways with his son Brendan, Christmas with Erin and the Totino clan in New Jersey, week long retreats to Cape May with Marsha, and wine tasting vacations throughout the US and Europe. Mike was always on the go - seemingly unable to sit still (except for playoff games and NCAA basketball). A wake will be held on Wednesday September 23, 2020 from 4-8pm at Richardson-Gaffey Funeral Home, 382 First Parish Road, Scituate. There will be a funeral mass on Friday, September 25, 2020 in New Jersey at St. Luke's Church in Ho-Ho-Kus. Mike will be buried in St. Luke's Cemetery following the mass. In lieu of flowers the family asks that donations be made to the Dana-Farber Jimmy Fund.

The family of Michael Treacy created this Life Tributes page to make it easy to share your memories.