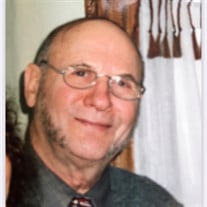 Michele Salvemini, age 87, known as Mike to most, returned to his heavenly home on Wednesday, April 15, 2020. Michele is survived by his daughter and son-in-law Madeline and Michael Michelin, his son Michael Salvemini, and his daughter and son-in-law Erica Salvemini and Peter Loria; his grandchildren, Kara, Ian, Seth, Shane, Liam, and Alex. He is also survived by his dear sister Margherita and brother-in-law Peter Decandia and dear brother Saverio Salvemini, as well as many nieces, nephews, and cousins. Born in 1933 in Molfetta, Italy, Michele was the loving son of Maddalena and Ignazio. Mike was a gifted sculptor and artist, a vocation he studied in Italy, as a young man. He also served in the Italian Army and came to the United States in 1959. He settled in Union City for twenty-five years, where he raised his family. He worked for Fasolino Monuments in New York for thirty years and belonged to the Stone Cutter’s and Granite Cutter’s Unions. Michele established Salvemini Monuments and Gallery in U.C. His beautiful work can still be seen in his hometown of Molfetta, the Washington National Cathedral, Kearny, NJ, Newburgh NY, and many churches and cemeteries in the tri-state area. Mike’s “15 minutes of fame” came when he was asked to carve a monument for Don Corleone’s funeral scene in The Godfather. Mike enjoyed being a member of the Knights of Columbus, the Amvets, and a volunteer of the Cronomer Valley Fire Department. His deep faith in religion, was very evident, motivating him to make a pilgrimage to Jerusalem in 2002. As a father, Mike enjoyed spending time with his family, vacationing, and shooting film and photos of all moments together. He also had a proclivity to march to his own drum regarding his fashion, sense of humor, love of animals, and religious quotes. A private Visitation will be held on Tuesday, April 21 from 11:30am – 1:30pm at Hunt Stellato Funeral Home, 1601 Palisade Avenue, Fort Lee.

The family of Michele Salvemini created this Life Tributes page to make it easy to share your memories.

Michele Salvemini, age 87, known as Mike to most, returned to...