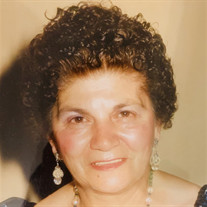 Milia Maldjian (nee Mouradian), 88, passed away on Monday, May 6, 2019 in Glen Cove, NY. Milia was born on December 17, 1930 in Aleppo, Syria. She was the daughter of Krikor (a concert cellist) and Makrouhie (Dangurian) Mouradian. Her parents, survivors of the Armenian genocide, had immigrated to Syria from Marash, Cilicia. Milia's early studies were at the Immaculate Conception Sisters of Aleppo, where she earned her baccalaureate. She then attended St. Joseph's University, Faculte Francaise de Medicine de Beirut, where she earned her degree as a midwife, delivering over 1000 babies during her career. In 1958 she married Vartavar Maldjian, an international award-winning artist, and they immigrated to the United States in 1961. She was multilingual and spoke several languages fluently, including Armenian, English, French, Turkish and Arabic. She raised 4 children in Newark, NJ with her husband Vartavar (who predeceased her in 2015). They were devoted parents and worked tirelessly to give their children the best upbringing and education. Having herself grown up in a musical household, she was an avid music lover and, with her husband's help, ensured that all their children received a strong musical education. Milia was also a gifted designer of clothing and an expert at making handmade, intricate needlework lace. She was a woman of intense faith and dedication, a loving and beloved wife and mother; and devoted grandmother and great grandmother. She set an example of self-sacrificing love for her entire family and she was deeply cherished by all. Milia is survived by her four children, 11 grandchildren and 1 great grandson: Dr. Pierre Maldjian and his wife, Sarita, and their children, Samantha, Bedros and Mihran; Dr. Joseph Maldjian and his wife, Mariana, and their children, Joseph, Ani, Andre and Raphael; Mariam Navarro and her husband, Joseph, and their children, Maria Bailey and her husband Jay and their son Rocco, Amelia Brown and her husband Jake; Dr. Catherine Maldjian Adam and her husband, Richard, and their children, Richard and Natalie. Milia is also survived by her sisters Maria Kaladjian, Nevere Boylan, and Colette Naljayan, and brothers Avedis and Hagop Mouradian. The funeral is on Friday May 17th at 10 a.m. from the Ippolito-Stellato Funeral Home, 7 Two Bridges Rd., Fairfield, NJ. A Funeral Mass is at 11 a.m. at Sacred Heart Armenian Catholic Church, Little Falls, N.J. Interment will follow at Holy Cross Cemetery, North Arlington, N.J. Friends will be received on Thursday May 16th from 4 to 8 p.m. at the funeral home. In lieu of flowers the family requests that you make donations to Sacred Heart Armenian Catholic Church, 155 Long Hill Road, Little Falls New Jersey 07424.

Milia Maldjian (nee Mouradian), 88, passed away on Monday, May 6, 2019 in Glen Cove, NY. Milia was born on December 17, 1930 in Aleppo, Syria. She was the daughter of Krikor (a concert cellist) and Makrouhie (Dangurian) Mouradian. Her parents,... View Obituary & Service Information

The family of Milia Maldjian created this Life Tributes page to make it easy to share your memories.

Milia Maldjian (nee Mouradian), 88, passed away on Monday, May...