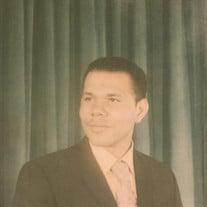 Known for his love of music, Pastor Jorge was a devoted husband and father of four who’s dreams to become a singer opened the doors for many in his family to travel to the United States. Born in 1940 in the Dominican Republic, Pastor dreamed about a life beyond poverty. Having had lost his father at the young age of 11 and being the second oldest, Pastor and his older brother worked and studied tirelessly to support their young siblings. He was known for his work ethic, however he was an artist at heart. Having been gifted with a singing voice, he soon began dreaming of traveling to the United States and becoming a famous singer. After years of singing locally and nearly 10 years of soliciting entry into the United States, he received a visa in 1966. After coming to the United States, he began to work in a warehouse and worked there until the day he retired, nonetheless he continued with his music. He also used his earnings to bring his mother and siblings to the U.S. for a better life. In 1971 he met and married his wife Alsacia (Deceased) and together they had four children. He continued his pursuit of music on the side, recorded two songs and performed them in the early 1980’s on television shows for Univision and Telemundo. Soon after, he decided to dedicate his life to providing for his family and became a respected choir singer for The Church of St. Catherine of Genoa located in the Hamilton Heights section of Manhattan. In 2003, after 30 years of marriage, his wife passed away. Although he struggled with the loss, he rejoined the Church Choir and spent his free time with his immediate family and watching movies. A stroke in late 2017 left him living in an assisted living facility, however he dreamed of one day returning home. He enjoyed the facility’s music program and had set his eye on once again playing the guitar. He passed away on April 30, 2020. Pastor Jorge will forever be known for his dedication to his family, his God gifted voice and the dream that brought his entire family to the land of opportunity. Families that now have a better life as professionals in the United States. Due to the current situation, viewing is private. In lieu of flower and donations, we ask that you spend time with your loved ones and cherish one another.

Known for his love of music, Pastor Jorge was a devoted husband and father of four who&#8217;s dreams to become a singer opened the doors for many in his family to travel to the United States. Born in 1940 in the Dominican Republic, Pastor... View Obituary & Service Information

The family of Pastor Jorge created this Life Tributes page to make it easy to share your memories.

Known for his love of music, Pastor Jorge was a devoted husband...