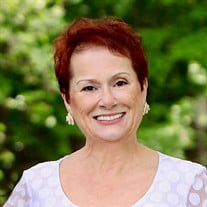 Patricia Guerriero, née Filizzola, passed away on Sunday, December 2, 2018 at Mt. Sinai Hospital, New York City. She was born on May 30, 1947 in Paterson, New Jersey to Carmella and Gilbert Filizzola. She endured a remarkably challenging childhood, yet she never lost faith in the value of a caring family and a good friend. These lessons of love, many of which were self-taught, finally came into practice when she married Anthony Guerriero on September 24, 1967. Together, the couple had five children, the bonds between whom Patricia insistently strengthened through good times and bad. The family remained in Paterson, where they were a beloved pillar of the Italian-American community, for more than twenty-five years. After Anthony’s untimely passing in December, 1997, Patricia fiercely strengthened the Guerrieros’ cherished closeness as each of the children started their own families. She remained devoted to her husband for the rest of her life and became a thoroughly invested and deeply involved grandmother to her fourteen grandchildren. In this time, she was employed as a real estate agent, a florist, a market research associate, and, most recently, a licensed insurance agent at her son, Tony’s, Allstate agency in Fairfield. She was also an active member of the Deborah Foundation. In what little spare time she had, she could usually be found at her son, Chris’, deli in Fairfield, holding court to an endless train of visitors and surrounded by her young grandchildren. She spent many a weekend cheering them on from the bleachers of little league games and the seats of dance recital auditoriums, always buried under the heaps of flowers, costume jewelry, hand-knitted scarves, and meticulously drafted notes of admiration she had toted along. She never once forgot a birthday, no matter how large her family grew and how widely it spread, nor did she ever miss an opportunity to scoop up each child or grandchild’s favorite treat—Sesame Street cupcakes for one, sfogliatelle for another, and, of course, an assortment of Italian bakery cookies for all. Every member of her family could rest assured that should there ever arise a trying time that demanded the support of a close friend, Patricia would appear at their side. And now, as she moves on to join her beloved husband in Heaven and our family enters these first days without our dear friend, each and every one of us can trust that we have another guardian angel watching from above, one ready to offer guidance, love, and fierce, fervid defense whenever we may need it. She is survived by her five children: Tony and his wife, Terese; Jenine and her husband, Joe; Chris and his wife, Sharon; Francine and her husband, Matt; and Dominick and his wife, Denise. She had many nieces and nephews, fourteen grandchildren—Victoria, Frankanthony, Olivia, Nicolas, Shea, Julia, Abigail, Dominick, Jr., Emerson, Demi, Regis, Anthony, Chelsea, and Matthew—and one great-granddaughter, Raeghan. She will be remembered for her gargantuan heart, love of cheetah print, pasta e fagioli, jewelry store games, Dancing with the Stars and Korean soap opera fandom, universal French braid remedies, and, most of all, for the unbridled joy she radiated as she watched her family exchange love and gifts each Christmas Eve. Visitation will be held on Friday, December 7th from 4-8pm at Stellato Funeral Home, 7 Two Bridges Road, Fairfield, NJ. Funeral Saturday, December 8 , 9:30AM from the funeral home with Mass to follow at 10:30 at St Pius X Church, 24 Changebridge Road, Montville, NJ.

Patricia Guerriero, née Filizzola, passed away on Sunday, December 2, 2018 at Mt. Sinai Hospital, New York City. She was born on May 30, 1947 in Paterson, New Jersey to Carmella and Gilbert Filizzola. She endured a remarkably challenging childhood,... View Obituary & Service Information

The family of Patricia Guerriero created this Life Tributes page to make it easy to share your memories.