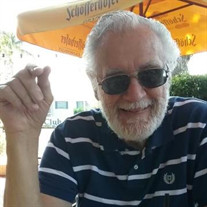 Stanley Witczak Jr. passed away peacefully on March 1, 2022 at the age of 86 at his home in Fairfield, NJ. Stanley Jr. was born in 1935 to Mary (Jewusiak) Witczak and Stanley F. Witczak of Bayonne, NJ. Raised in Bayonne with his older brother Walter G. (predeceased 1973), he attended Bayonne High School. During his high school years, he was introduced to the love of his life and future wife Marie (DiMeola) Witczak. He attended St. Peter’s College in Jersey City, NJ where he studied Economics. During his time at St. Peter’s, he participated in the Reserve Officers' Training Corps. As a member of the Army Reserve he was called to active duty in 1961 and was stationed at Fort Dix, New Jersey. He would eventually be reassigned to the Ordinance Unit in Aberdeen, Maryland with the rank of Sergeant First Class. In 1965, Stan and Marie along with their son and daughter moved from Bayonne to Fairfield, NJ. The family would be blessed with two more daughters. Stan was employed by trucking companies as a Traffic Manager routing freight across the continental United States. In the summer of 1977, Stan and Marie provided their children with the experience of a lifetime as they traveled across the country for a hands-on history lesson. They witnessed first-hand the beauty of the United States, its monuments, and its people. Stan led by example and taught his children to accept people for who they are and to never stop learning about other cultures. Stanley and Marie’s love for travel continued throughout their lives and they were blessed to take many trips abroad, as well as spending time with family at the Jersey Shore. Prior to retirement, Stan worked for the United States Postal Service in West Caldwell, NJ. During his time with the Postal Service Stan utilized the GI Bill to continue his education and receive a degree in Economics from Bloomfield College. Stan was a proud member of the Knights of Columbus Council #6380 St. Thomas More Roman Catholic Church in Fairfield, NJ. He was named a Grand Knight and would later become a 4th degree member of the Color Corps with the Father Issac Joques Assembly. Additionally, he was named a Faithful Navigator and was responsible for the welfare of the Assembly. Stan is survived by Marie (DiMeola) Witczak, his devoted wife of over 62 years. He is also survived by his loving children, Stanley III (Cathleen) Witczak of Mendham, NJ, daughters: Carolyn (Michael) Wolfe of Lebanon, PA, Kathleen (Michael) Matzelle of Ramsey, NJ, and Gail (Steven) Sherba of Oak Ridge, NJ. Stan also leaves behind his 12 adoring grandchildren, Nicholas & Abigail Witczak, Michael, Christina, Jessica, & Emily Wolfe, Christopher, Ryan, & Thomas Matzelle, Steven, Gianna, and Samantha Sherba. Stan’s family would like to express our sincere appreciation to the Atlantic Health Systems Hospice Care Nurses. In lieu of flowers, the family requests that donations be made to Atlantic Health System Hospice Care Visiting Nurse Services, 465 South Street, Suite 100B, Morristown, NJ 07960. Relatives and friends are invited to visit with the family at Ippolito-Stellato Funeral Home at 7 Two Bridges Road, Fairfield, NJ on Sunday March 6, 2022 from 2PM to 6PM. A funeral mass will be celebrated on Monday March 7th at 10AM at St. Thomas More Roman Catholic Church, 12 Hollywood Avenue, Fairfield, NJ. Interment at Holy Cross Cemetery 340 Ridge Road, North Arlington, NJ 07031

Stanley Witczak Jr. passed away peacefully on March 1, 2022 at the age of 86 at his home in Fairfield, NJ. Stanley Jr. was born in 1935 to Mary (Jewusiak) Witczak and Stanley F. Witczak of Bayonne, NJ. Raised in Bayonne with his older brother... View Obituary & Service Information

The family of Stanley Witczak, Jr. created this Life Tributes page to make it easy to share your memories.