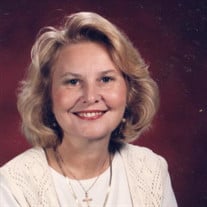 Sylvia “Chickie” Farone (nee Cappitelli) Sylvia passed away peacefully in her sleep on Thursday, March 18, 2021. She was in the comfort of her home of 46 years as she struggled with the difficulties of Alzheimer’s Disease. Beloved wife of the late John Farone. Loving mother of Debra & her husband Gerald Kean, Darlene & her late husband Gregg Higgins and the late Dina Muehlbauer. Cherished grandmother of Brittany, Christopher, Rebecca, Daniel, Madison & Ryan. Adored great-grandmother of Nathaniel & Declan. Dear sister-in-law of Robert and Jill Farone. During Sylvia’s younger years, she spent a great deal of time with family. We often heard stories about her aunts, uncles, grandparents, and cousins. Family and friends were the most cherished part of her life. Sylvia and John met as neighbors in Lyndhurst NJ and were married in May 1963, they remained married until John’s passing in July 2017. Some of their closest friends were people they met in high school, Pat and Frank DiChiara and Dottie and Joe Oliver. They later moved to Clifton where they raised Debbie, Darlene, and Dina. This was a joyful part of their lives as they met friends like Ralph and Ceil Iradi and made many happy memories with their neighbors and friends. When their Clifton neighbors decided to move to Fairfield in 1975, Sylvia and John followed. Sylvia enjoyed working with Sister Agnes Bernard at St. Thomas More Church in the early 80s. In 1987 she began working as secretary to the principal at the West Essex Middle School. The friends she met at St. Thomas More and West Essex were very special to Sylvia. She always had fun stories to tell about her experiences working at the school. Sometimes we would be out to dinner and a former student would run up to give her a big hug and say “Mrs. Farone you helped me so much. I wouldn’t have made it through my middle school years without you!’ Sylvia’s greatest joys were her six grandchildren. She loved spending time with each of them, and especially enjoyed when they were all together. She always surrounded herself with her family and friends. Sylvia’s life was full of love and laughter. Anyone who knew Sylvia knows how special she was and how much she cared about everyone. She will be deeply missed. Funeral Mass Tuesday 11AM St. Thomas More R.C. Church. Interment Gate of Heaven Cemetery. For a live stream of Sylvia’s Mass click the link below https://fb.me/e/1dEN2st0v

Sylvia &#8220;Chickie&#8221; Farone (nee Cappitelli) Sylvia passed away peacefully in her sleep on Thursday, March 18, 2021. She was in the comfort of her home of 46 years as she struggled with the difficulties of Alzheimer&#8217;s Disease. Beloved... View Obituary & Service Information

The family of Sylvia Farone created this Life Tributes page to make it easy to share your memories.