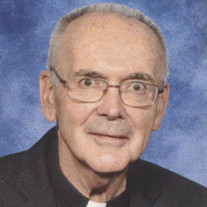 Rev. Ward P. Moore, 75, of Caldwell, New Jersey, passed away on Wednesday, December 18, 2019 at RWJ Barnabas Hospital in Livingston. Born in New York, NY, he was raised in Ridgefield, NJ. He graduated from St. Peter’s College and the Immaculate Conception Seminary in Darlington, NJ. Ordained to the Catholic priesthood on May 27, 1972, Father Ward devoted his life to serving his parishioners and living his faith. A humble person who led by example, he was an inspiration to his family and friends, particularly as he battled Parkinson’s disease over the past eight years. Fr. Ward began his ministry in 1972, initially serving at St. Joseph’s Church, West Orange, Our Lady of Sorrows in South Orange and Madonna Parish in Fort Lee. Over the next 30 years, he served as pastor of St. Brigid Parish in North Bergen, Holy Trinity Parish in Hackensack, St. Andrew Parish in Westwood, and St. Thomas More Parish in Fairfield. He also served as chaplain of the Fairfield Knights of Columbus, Council 6380. Following his retirement, he resided at the Msgr. Kelly Residence for retired priests in Caldwell. He was predeceased by his parents, Martin and Helen (nee Ward) Moore and his two sisters, Marilyn Moore and Derris Oddo.  He was the dear brother-in-law of Philip & his wife Kathleen Oddo and the cherished uncle of Helene & her husband John Kennedy, Lawrence & his wife Irene Kansky, Martin & his wife Teresa Kansky, Kevin & his wife Kathleen Oddo, Ellen & her husband Paul Zotti, Matthew & his wife Michele Kansky, Glenn Oddo, and Aileen & her husband Thomas Florio. He was adored by 13 grandnieces and grandnephews and one great-grandniece. He loved spending time at the New Jersey shore and at family barbecues. He enjoyed cheering on the Yankees and Giants, playing golf, reading, and traveling. His quiet wisdom and commitment to kindness are part of the legacy he leaves behind. Friends will be received Sunday, December 22, from 4 to 8 p.m.at the Ippolito- Stellato Funeral Home, 7 Two Bridges Road, Fairfield.  A Mass of Christian Burial will be held on Monday, December 23 ,at 10 a.m. at St. Thomas More R.C. Church, Fairfield. Internment is at Gate of Heaven Cemetery, Hawthorne, New York.  Condolences may be sent to stellatofuneralhomes.com. Donations in memory of Fr. Ward may be made to the Msgr. Kelly Residence for Retired Priests, 247 Bloomfield Ave., Caldwell, NJ 07006.

Rev. Ward P. Moore, 75, of Caldwell, New Jersey, passed away on Wednesday, December 18, 2019 at RWJ Barnabas Hospital in Livingston. Born in New York, NY, he was raised in Ridgefield, NJ. He graduated from St. Peter&#8217;s College and the Immaculate... View Obituary & Service Information

The family of Rev. Ward Moore created this Life Tributes page to make it easy to share your memories.