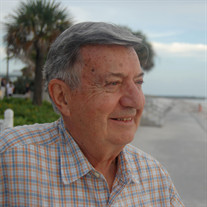 Henry (Hank) Stanziano, 87, of Fairfield, New Jersey passed away peacefully on Wednesday, November 6, 2019. Beloved husband of 64 years to Anne (nee Evancho) Stanziano. Loving father of the late Dr. Gary Stanziano, Sharon and her husband Bernard Grace. Dear father-in-law of Deborah Stanziano. Cherished brother of Albert Stanziano. Adored grandfather of Katie, Joseph and Roman. Devoted Uncle of Kim and John Manfredo, their daughter Melissa and her husband Connor Sheldrick and their daughters Jade and Madison, Marianne Evancho and fiancé James McHugh, Margo Evancho, Matthew Evancho and his wife Jennifer and their children Elise and Aiden. Hank was born May 25, 1932, in Passaic, New Jersey to Albert and Anne (nee Randazzo) Stanziano. He grew up in Clifton and attended art school at Montclair Museum of Art. He served in the U.S. Army during the Korean War at Madigan Army Medical Center in Washington State where his artistic talents led to his painting of a multiple murals on base. His love of painting continued throughout his life, as did his passion for sports, especially baseball, basketball, and golf. Hank’s career included many years as art director at the Curtiss Wright Corporation and creative director at the Beckley Press, from which he retired in 1997. He and Anne traveled throughout Europe, with Italy being their favorite spot. He loved spending time with his grandchildren and his magic tricks brought many smiles. He could tell a great story, show you how to throw a curveball and cook Italian dishes like no other. His memory will remain in our hearts forever. Funeral services will be Monday 8:30AM from the Ippolito-Stellato Funeral Home, 7 Two Bridges Road, Fairfield and a Funeral Mass 9:30AM Holy Angels R.C. Church, 473 Main St, Little Falls. Entombment at Gate of Heaven Chapel Mausoleum, 225 Ridgedale Ave, East Hanover. Friends will be received Sunday 2-6PM.

The family of Henry Stanziano created this Life Tributes page to make it easy to share your memories.