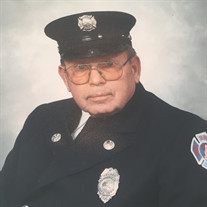 On November 23, 2018 James Edward Lowe of Fairfield, NJ passed away. James, or Jim as he was known to most, was 87 years old, born on March 15, 1931 in Newark, NJ. He was raised in the greater Newark area of Essex County. At 17 he enlisted in the United States Army and served from 1948-1951, mostly in post WWII Germany as part of the initial peace keeping mission that would mark the beginning of the Cold War. Following his discharge from military service, he was trained as a structural ironworker, a trade he practiced as a union tradesman working out of Local 11 of the International Association of Bridge, Structural, Ornamental and Reinforcing Iron Workers. He married his wife of 64 years, Loretta, on June 12, 1954 and the new family eventually settled in Fairfield in March of 1960. James and Loretta would go on to have 5 children, to whom James was a loving father. James was also a proud member of the Fairfield Volunteer Fire Department for 57 years, holding various leadership roles, most notably vice president, treasurer and fundraising chairman for over 25 years. James was a figure of Fairfield life for most of the last 60 years, actively participating in township politics and events. He was a faithful parishioner of St. Thomas More Church. James was predeceased by his parents Margret (Ward) Lowe, and Ernest Lowe, his brother Thomas Lowe, his sister Arlaine Lowe, and his son-in-law Gabriel Scalcione. He is survived by his wife Loretta (Pier) Lowe, his children Deborah A. Scalcione, Donna M. Kon, Arlene M. Lowe, James E. Lowe, and Robert R. Lowe, his son-in-law Michael Kon, his daughter-in-law Kathleen Lowe, his grandchildren Matthew G. Scalcione (Kimberly Scalcione), Diane M. Lowe (Christopher Furlong), Aaron G. Lowe, Emilia F. Kon, and Rachel M. Kon, his great grandchildren James E. Lowe, Delainey J. Scalcione, Kaylee M. Furlong, and Eliza F. Scalcione, and his sisters-in-law Sharon Faas and Virginia Lowe. In lieu of flowers, donations can be sent to the Fairfield Volunteer Fire Department 5 Commerce Rd. Fairfield, NJ 07004 or The Several Sources Shelters PO Box 157, Ramsey NJ 07446.

On November 23, 2018 James Edward Lowe of Fairfield, NJ passed away. James, or Jim as he was known to most, was 87 years old, born on March 15, 1931 in Newark, NJ. He was raised in the greater Newark area of Essex County. At 17 he enlisted in... View Obituary & Service Information

The family of James Edward Lowe created this Life Tributes page to make it easy to share your memories.