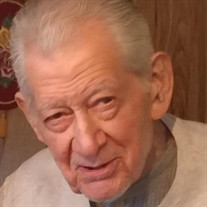 Jose Pazos-Ayerbe (May 3, 1928 – March 23, 2020) Jose Pazos-Ayerbe, 91, passed away peacefully in his sleep at 11:27PM on Monday, March 23, at Hackensack University Medical Center, Hackensack, NJ, as a result of multiple medical complications. He was born in La Habana, Cuba, to the late Jose Pazos-Nuñez and Isabel Ayerbe-Queiro de Pazos. He was an avid fan of the Boston Red Sox; French-Argentine singer Carlos Gardel; American singer Jerry Lee Lewis; American radio personality Rush Limbaugh; the HBO Game of Thrones series, thankfully he lived long enough to see its final episode; in addition to his love for Las Vegas, where he spent many years vacationing and nurturing lifelong friendships, including one, both on opposite sides during the Bay of Pigs attack. During an infancy illness, requiring uprooting to a colder climate environment, his Spanish roots brought him, parents and sister to Spain, until it was medically safe for him to return to Cuba, where he spent most of his younger years. At a very young age, he was taken under the wing of a diamond-cutting outfit, where he learned and fell in love with the trade, and rather good at it. This all changed in 1959, when the Castro regime destroyed all private sector businesses, implementing Communism. Three years prior, he married the love of his life, and were very happily married for 63 years. After living a very comfortable life, they were forced, as many Cubans, to relinquish all private properties, businesses and assets, and to reinvent the art of survival. Losing their jobs upon filing for exile, resulted in years in a concentration camp, leaving his loving wife to fend for herself, looking for any available work, while trading in the black market to send him food. During this very difficult time, they endured the heart-wrenching decision to allow their only daughter to exile to Spain with his parents and sister in March, 1969, with the very realistic, fearful possibility of never reconnecting, yet hoping of eventually reuniting one day in the United States; a painful separation, lasting until July, 1970. Unfortunate in reconnecting with the trade he loved, and while trying to learn the language, acclimate to the American way, and starting with literally nothing, he worked for many years in a tool warehouse, until retiring in 1992, after a scare with cancer, which resulted in the blessing of being cancer-free for the following 28 years until his death. He achieved the American Dream, becoming a homeowner, and devoting his life to his family, faith and hard work. He leaves wife Julia, daughter Mayra Enquist and husband Dean, sister Isabel, all of Lyndhurst, NJ; stepson Pedro Casas and wife Julia (Muñeca) Cordero de Casas of PR; stepdaughter-in-law Gina Casas of Merriam, KS; nephew, Abelardo Bru and wife Delia of Sarasota, FL; niece Julia Bru and wife Suzy Izaguirre of Miami Beach FL; many cousins, step-grandchildren, step-great-grandchildren, great-nieces, and lifelong wonderful neighbors and friends. He is predeceased by stepson, Jorge Casas and great-nephew, Christopher Berrojo. Funeral services are private under the direction of Ippolito-Stellato Funeral Home, 425 Ridge Road, Lyndhurst, NJ 07071

The family of Jose Pazos-Ayerbe created this Life Tributes page to make it easy to share your memories.