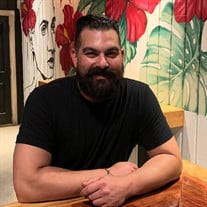 Joseph Curado (AKA Joe Wood) of Fairfield, New Jersey, passed away on January 28, 2020. Beloved son of Carmela Sebastiano and Joseph Curado. Dear brother of Tony and Christopher Curado. Beloved Godson of Angela Sebastiano and nephew of Frank Ott. Godson of Frank Sebastiano and nephew of Theresa Sebastiano. He is also survived by his soulmate, Jacki Farnese, and many great aunts, aunts, uncles and cousins which he loved like his own brothers and sisters. He left behind an endless list of friends. Joe was born April 5th, 1977; from an early age it was apparent how special he was. His charisma and love for everyone he met was abundant. Everywhere he went he spread laughter to brighten the day. Everyone who met him built a memory with him. A devoted family man, nothing made him happier than making memories with family. So much so, that in 2010 he started a successful wood shop, Tribeca Grain, in Jersey City from “scraps” of his family’s restaurant in NYC. Gone too soon, he will be remembered for his charming personality, ability to make you smile and his own unique phrases. He will be deeply missed by many but his memory will live forever in our hearts. Choops! Friends will be received Friday 3-8PM at the Ippolito-Stellato Funeral Home, 7 Two Bridges Road, Fairfield. Funeral Saturday 8:30AM from the funeral home. Funeral Mass 9:30AM Notre Dame R.C. Church, North Caldwell. Entombment Holy Cross Chapel Mausoleum, North Arlington. In lieu of flowers donations may be made to The JustinTime Foundation, 1 Lafayette Drive, Cedar Grove NJ 07009 OR American Breast Cancer Foundation, 10400 Little Patuxent Parkway, Suite 480, Columbia MD 21044 OR National Center for Missing & Exploited Children, 333 John Carlyle Street, Suite 125, Alexandria VA 22314. Memorial Mass Thursday, January 28, 2021 https://fb.me/e/3c5MFhA7z

The family of Joseph Frank Curado created this Life Tributes page to make it easy to share your memories.