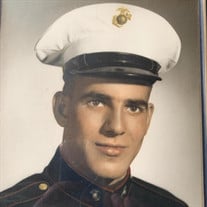 Joseph P. Linardi There will no blame or banter, we must all resolve in the fact that God called him home and he embraced it. We lost a great man on Monday 3/30/2020, it could have been his age, his heart or the coronavirus. Its not going to change the story so it doesn't matter. He was more than just a number or a statistic. Joseph was born on March 17, 1928 Fairview, NJ weighing in at over 12 lbs according to his mother, but he was weighed on a scale in an Italian deli so, who knows. His father was the late Anthony and his mother was Maria "Mary Rea" of Fairview, NJ. Joe quit high school to follow his big brother Sam (Late Retired Fairview Chief of Police) into the US Marines earning rank of Staff Sergeant after serving in both WWII and the Korean War. Upon his release of service, he returned to Fairview only to find that his family had relocated and the letters telling each the news of both the release and relocation crossed in the mail. He then went to the school of his baby sister Ann Marie (late Lubrano) only to be told they wouldn't interrupt her class or let him see her until the end of the day. Few hours later Ann Marie was happy to see her big brother and bring him to the new house but the novelty of surprise had waned and he was a bit grumpy to say the least but he got over it. Joe started his career in Lever Brothers in Edgewater where he met and eventually married Margarite (late Ford) on October 9, 1954. Together they raised their 7 children in Edgewater where there were numerous times he proclaimed he'd rather be on the front lines but having 6 girls and 1 boy would make anyone wish they were elsewhere from time to time. Joe's dedication to his family didn't leave for too many outlets but He was a member of the Hudson County Pigeon club and raised pigeons in his backyard for years winning numerous awards. He had gardens in his backyard every summer, was on a bowling league at Nungessers and very rarely went "up on the hill" to enjoy a drink or two. Joe leaves to mourn his children, Jean and her husband Rudy (Kolder), Amy Nasser, Susan and her husband Robert (Bernard), Janet and her husband Perry (Giuliano), Nancy and her husband Danny (DeMarco), Julie Linardi and Joe Jr and his former son in law Sam Nasser. He was the adored Poppy to Shannon and Sean (Kolder), Sarrah, David, Elizabeth, Rhana and her husband Nick (Prussia) and Adam Nasser, Dawn Ann and her husband Chris (Gannon) and Joseph Bernard, Michael and Maria Giuliano, Desirae and Daniel DeMarco and Patrick Bussanich. Great Poppy to Laryce, Samantha, Amira, Adrian, Alexander, Amaya and baby Gannon. Literal Uncle of too many to mention as he answered to anyone who called him "Uncle Joe". For now, services are private but once we get the "go ahead" we are going to have the party he wanted and all will be welcome to "Joe Linardi's Party". We would like to thank his cardiologist and "Go to" Ronald Strobel and his nurse Fatima for all of their years of dedication and care. In lieu of flowers we ask that you send a donation to the Edgewater Volunteer Ambulance Corps as they were more than family over the last years and are more than worthy. In closing, any time any of us would ask my dad what he wanted or needed and he would always say "A few kind words". We have received more and are truly greatful.

Joseph P. Linardi There will no blame or banter, we must all resolve in the fact that God called him home and he embraced it. We lost a great man on Monday 3/30/2020, it could have been his age, his heart or the coronavirus. Its not going... View Obituary & Service Information

The family of Joseph Patrick Linardi created this Life Tributes page to make it easy to share your memories.

Joseph P. Linardi There will no blame or banter, we must all...