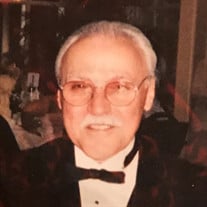 Joseph “JJ/Jay” (80) of Fairfield, New Jersey died peacefully at home on Friday, April 23, 2021. He was born and raised in Montclair, NJ before moving to Verona in his late teens. Jay went on to serve his country proudly in the U.S. Army…stationed in Berlin, Germany. After his tour of military duty, Jay returned to his home in Verona. In 1966, he moved to Fairfield, NJ, where he and his wife raised their family. Jay is survived by his wife (of 56+ years) Edith “Edie” (Bommelyn) Zarillo, a daughter, Dena, and a son, Joseph Jr., who is the father of his four precious Grandchildren…the oldest, Harlie, and triplets…Joseph III (Joey), Francesca (Frankie), and Isabella (Bella) Zarillo, all residing in Fairfield, NJ. Jay leaves a younger brother, Stephen (Steve) Zarillo and his wife, Lori of Toms River. He is the Godfather of Cheryl (Nightingale) Bennett and is also survived by many dear and treasured cousins, nieces, great-nieces, nephews, and great-nephews…all holding a special place in his life and heart and (as well) in their lives and hearts for him. Jay was preceded in death by his parents: Elvira (Salerno) Zarillo and Angelo Zarillo and his in-laws: Sue (Pagnillo) Bommelyn and James H. Bommelyn. After his tour of military duty, Jay worked for Brookdale ShopRite in Bloomfield as Manager of the Deli Department. He then became owner of The Italian Carousel, Ramsey NJ for 20+ years enjoying a reputation for one of the best Delicatessens in Bergen County. Upon retirement, he worked for Salerno-Duane INFINITY of Denville in the parts department. He had a heart of GOLD and a love for his family that was unsurpassed. Jay fought a three-year courageous battle against Pancreatic Cancer and was able to live a blessed life despite this fatal illness. During this time Jay was able to celebrate a milestone (80th) birthday with family and friends that he so enjoyed! Through his perseverance and courage, he continued to share holidays, enjoy precious moments, and other milestones with family. Jay left us with memories we will treasure until we meet again. Jay’s entire life was devoted to his wife, Edie, his daughter, Dena, his son, Joe and his four Grandchildren, Harlie, Frankie, Bella & Joey. He was a gentle, loving, hands-on Dad and Caregiver for his daughter, Dena, who suffers from RETT Syndrome (a neurological disorder). Jay enjoyed cooking for his family. Although, the greater part of each day was spent with his immediate family…he did find time to enjoy playing golf with his brother, Steve, his two nephews…David, and Darren Zarillo, and occasionally with friends too. Prior to his love for golf, he did enjoy deep sea fishing with friends. The “Zarillo” home was a welcomed gathering place for so many special events of family and friends to come together, celebrate and create memories. A home that made you feel most welcomed and loved. We will have many happy memories to comfort us. JJ/Jay, you will be deeply missed! Due to the current circumstances services will be private. In lieu of Flowers…if you would like to donate in JJ/Jay’s memory, please send a check to: NJRSA at 417 Brickyard Road, Freehold, NJ 07728, or visit their website at www.njrsa.org New Jersey RETT Syndrome Association (NJRSA) is a non-profit organization that was close to Jay’s heart because his daughter, Dena, is afflicted with the illness.

Joseph &#8220;JJ/Jay&#8221; (80) of Fairfield, New Jersey died peacefully at home on Friday, April 23, 2021. He was born and raised in Montclair, NJ before moving to Verona in his late teens. Jay went on to serve his country proudly in the... View Obituary & Service Information

The family of Joseph J. Zarillo Sr. created this Life Tributes page to make it easy to share your memories.