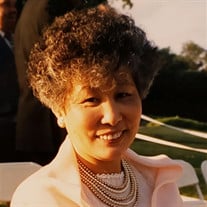 Jung Hi Jackson (nee Chun), 85 of Hasbrouck Heights NJ, lived a full life which was dedicated to her family. During her early years in Korea, she encountered heartache when the family was separated from her sisters during the conflict. Jung Hi (nicknamed “Diana” by her adoring mother-in-law) was born on April 6, 1935 to her parents Yi Hong Chun and Kui Dong Chun. She married an American soldier named Aaron Alexander Jackson, Jr. who was stationed in Seoul and had two children, Jordan James and Shirley Anne. After she arrived in New Jersey to her welcoming in-laws Mildred Nancy Jackson and Aaron Alexander Jackson, Sr., she had two more children, Barbara Jane and Dawn Loretta. Her brother Wha Jung Chun eventually joined her in the United States together with his wife Kyung Ja and their children Mee Sook and Kyang Suk. They immediately became part of the Jackson clan. Her parents would soon follow and it was one big melting pot family in New Jersey. Diana was a stay at home mother until she went to work at Becton Dickinson in East Rutherford, New Jersey. She was recently predeceased by her beloved husband, who most knew as “Abie” … but to her it was “Jackson” and to him she was “Chun” names they called each other since the day they met. Mrs. Jackson’s love for her mother-in-law discredited all of the mother-in-law theories. They were inseparable and they both taught us the true meaning of love of family and the love of God. We were taught respect for each other, towards others, and especially for elders. Jung Hi Jackson has also been predeceased by her brother, parents, and in-laws. She is survived by her only son Jordan James Jackson and his children Nicole, Darren and Shawna. Diana’s oldest daughter Shirley Anne Fitzsimmons with her husband William and her daughters Anissa and Stephanie. Daughter number two, Barbara Jane Malcolm and her two daughters Monique and Ashley. She is also survived by the baby, daughter number three Dawn Loretta Quinn, her husband Thomas Jr. and their sons Alex and Thomas III. She is survived by a host of nieces and nephews including Mee Sook Kim, her husband Paul and their 3 children, her nephew Kyung Suk, daughter-in-law Kathy and her caretaker Deyanira Sanchez as well as a host of family and friends. Jung Hi Jackson fought a good fight and we are happy to know that when she arrived at the gates of Heaven she heard those special words “well done my good and faithful servant” … we will miss you and await to see you again. We are proud to have called you Mom, Ohmany, Ohma, Mommy, Mommya, Gomo (Aunt) and Halmony (Grandmother). Your loving family.

Jung Hi Jackson (nee Chun), 85 of Hasbrouck Heights NJ, lived a full life which was dedicated to her family. During her early years in Korea, she encountered heartache when the family was separated from her sisters during the conflict. Jung... View Obituary & Service Information

The family of Jung Hi Jackson created this Life Tributes page to make it easy to share your memories.