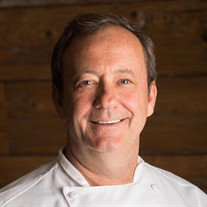 Kevin Charles Kohler, 63, of Mahwah, New Jersey passed away suddenly on Wednesday, January 6, 2021. Devoted father of Kristie & her husband Michael Messano, Jason Kohler, Lindsay & her husband Roger Masi, and Max Kohler. Cherished grandfather of Chase, Crew, & Ava. Loving brother of Kathy & Jeff Jacobson. Dear uncle of Kori Boralsky & Jeff Jacobson. Also survived by many close friends who were more like family. Mr. Kohler attended Brooklyn Community College where he studied Hotel & Restaurant Management. He completed an externship with the 4 Seasons in NYC before coming to NJ where he was head chef at Jimmy Reid's in Ramsey. On July 15, 1985, Kevin opened Cafe Panache. As Owner and Head Chef, his fine dining, "bring your own" restaurant in Ramsey, New Jersey has consistently rated amongst the best restaurants in the state for three decades. Chef Kohler's passion for using only farm-fresh fruits and vegetables, free-range, grass-fed livestock and the finest quality ingredients has always been showcased through his menu. Since 1985, he has hand-picked his own local produce and personally crafted dishes according to seasonal availability, creating boldly flavored signature plates, making Cafe Panache a favorite dining spot for loyal patrons and food critics alike. He received multiple 3 & 4 star reviews from publications like The New York Times, New Jersey Monthly and The Record. Cafe Panache was featured in New Jersey Monthly's Best Restaurant's List from 2010-2020. Cafe Panache was included year-after-year on 201 Magazine's annual "Best of Bergen" list in the categories of "Best Chef", "Best Fine Dining Restaurant", "Best Farm to Table Restaurant", and "Most Romantic Restaurant". Although his culinary abilities were unparalleled, he will be greatly missed for his infectious personality that drew so many to him. Funeral Services are private and under the direction of Ippolito-Stellato Funeral Home, 7 Two Bridges Road, Fairfield. A memorial will be planned near his birthday in July to honor him and celebrate his life with all who loved him. As he found joy in feeding people in life, and to continue that legacy, the family asks that any donations be made in his name to Table to Table, 611 Route 46 West, Suite 240, Hasbrouck Heights, NJ 07604, a charity that was near to his heart.

The family of Kevin C. Kohler created this Life Tributes page to make it easy to share your memories.