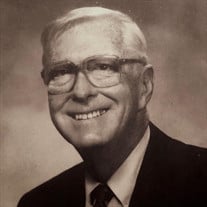 Paul B. Haggerty, a civic, community and political figure in Lyndhurst for over 50 years, passed away Tuesday. He was 84. Born and raised in Brooklyn, NY, Paul attended St. Brendan’s Catholic Grammar School. He went on to attend Brooklyn Preparatory, a Jesuit high school, where he captained his high school football team, ran track and served as the student council president. His great successes on the football field earned him a scholarship to St. Francis College in Loretto, PA, where he continued his talent on the field, became president of his fraternity, Theta Kappa Phi, and was selected as Who’s Who Among American Colleges and Universities. Upon his graduation, Paul joined the United States Marine Corp, a service which would define his life and his love of country. He rose to the position of Captain, serving ten years before his Honorable Discharge in 1962. In 1956, Paul married the former Elaine Carella of Lyndhurst. Together, they lived at Camp Lejeune before moving to Lyndhurst permanently in 1958. Paul remained a Marine Reservist and also began his first job at R.H. Macy and Co. in New York City. There, he was in charge of organizing and leading its Thanksgiving Day Parade and escorting its celebrity guests. In 1962, Paul began his Wall Street career where, for the next 35 years, he held nearly every position and license on Wall Street, from sales, to management and partner. Known for his integrity and ethics, Paul annually received the ethics award from his respective firms. In 1963, Paul was elected to the Lyndhurst Board of Education and served a term as its president. Throughout the 1960s, Paul continued to be very active in Lyndhurst affairs. In 1972, he returned to the Board of Education to fulfill an unexpired term. Throughout the following decades, Paul became active in the American Legion Post 139, his second home, serving a term as commander, as well as chaplain. He was a parishioner of St. Michael’s Church where for years he was a lector and served on multiple parish committees. He was also a member of the Knights of Columbus. In 1989, he was elected to the Board of Commissioners serving as Director of Public Works, and in 1993 as Director of Public Safety. He also served on the Lyndhurst Planning Board, as well as the North Arlington—Lyndhurst Joint Sewer. Paul will always be remembered by all who knew him as a kind, decent man who always sought to help anyone and everyone. His smile, laughter and love of life were contagious and all who knew him were the better for it. In addition to his wife, Elaine, Paul is survived by his sons, Paul and Brian; a daughter, Maura; three grandchildren, Paul, Nicholas and Kaley; two great-grandchildren, Paul and Brielle, and his sister, Colleen Foley. The family would like all who knew and loved Paul to join with them in a celebration of his life on Saturday, December 1st, at St. Michael’s Church on Ridge Road in Lyndhurst. The family will be receiving visitors from 1PM to 2:30PM, immediately followed by a Mass. In lieu of flowers, the family has asked that anyone wishing to make a donation please do so to the Lyndhurst American Legion Post 139.

Paul B. Haggerty, a civic, community and political figure in Lyndhurst for over 50 years, passed away Tuesday. He was 84. Born and raised in Brooklyn, NY, Paul attended St. Brendan&#8217;s Catholic Grammar School. He went on to attend Brooklyn... View Obituary & Service Information

The family of Paul B. Haggerty created this Life Tributes page to make it easy to share your memories.

Paul B. Haggerty, a civic, community and political figure in...