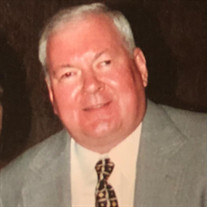 Chmielewski, Raymond F., “Ray,” 75, was born and raised in Jersey City, the son of the late Raymond W. Chmielewski and Evelyn Hague Chmielewski. He was a graduate of William L. Dickinson H.S. and St. Peter’s University of Jersey City. He was a 25-year employee of Maxwell House, Hoboken, where his dad was also chief steward. After Maxwell House closed, he worked at the U.S. Treasury Dept. for 25 years before retiring in 2015. He was drafted into the Army in 1966 and sent to Vietnam that same year where he was seriously injured in a land mine explosion in combat spending 13 months recovering in military hospitals. He was awarded the Purple Heart and the Combat Infantryman’s Badge of which he was very proud. Ray also loved sports, he was an avid fan of the N.Y. Mets, N.Y. Giants, and the N.J. Devils. Ray was the beloved husband of Rosemary married for 51 years and was a resident of Lyndhurst for 47 years. He was the devoted father of Raymond (Marianne) and Joseph and was the adoring Granddad of Daniel and Joseph. He is also survived by his aunt and uncle Helen and Gabriel Yandoli, many cousins, and his in-laws the Glowacz, Archer, Collins, Virga, and Deering Families. Funeral Mass Tuesday 1PM at Sacred Heart Church, Lyndhurst. Interment to follow at Holy Cross Cemetery, North Arlington. Arrangements under the direction of Ippolito-Stellato Funeral Home, Lyndhurst. In lieu of flowers donations may be made to St. Jude Children's Research Hospital, 501 St. Jude Pl., Memphis, TN 38105 or Wounded Warrior Project, PO Box 758516, Topeka KS 66675-8516. Send condolences to stellatofuneralhomes.com Below is a link for the livestream of Raymond’s funeral mass https://fb.me/e/SmQTUZtE

Chmielewski, Raymond F., &#8220;Ray,&#8221; 75, was born and raised in Jersey City, the son of the late Raymond W. Chmielewski and Evelyn Hague Chmielewski. He was a graduate of William L. Dickinson H.S. and St. Peter&#8217;s University of... View Obituary & Service Information

The family of Raymond F. Chmielewski created this Life Tributes page to make it easy to share your memories.