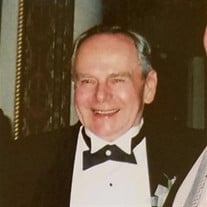 Richard A. "Dick" Kurtz, 87, of Jersey City, New Jersey, passed away Monday, May 20, 2019. Beloved husband of the late Cecelia Kurtz (nee Lepore). Loving father of Richard Kurtz & his wife Karen, Debra Kurtz-Hahn & her husband Donald, William Kurtz & his wife Jacki, and the late Joseph Kurtz. Cherished grandfather of Jessica, Kerri-Lynn, Edward, Richard, Samantha, Daniel, Michael, Wilson, and Spencer. Adored great-grandfather of Austin, Kamryon, and Daniel. Dear brother of Elizabeth Stevenson & her husband Robert, the late Harry Kurtz, Shirley Varacalli, and Ronald Redfield. Dear uncle and friend of Anthony Varacalli. He is also survived by many nieces and nephews. Dick was an Army Veteran serving during the Korean War. He was a hardworking, dedicated and adventurous man. He enjoyed spending time with his family, his many friends and watching Westerns. He was respected and loved by all that knew him. Funeral will be on Saturday at 9:45 AM from the Caiola-Stellato Funeral Home, 691 Avenue C, Bayonne. Funeral Mass will be at 10:45 AM at St. Henry's R.C. Church. Entombment to follow Holy Name Mausoleum, Jersey City. Friends will be received Friday 2-4 & 7-9 PM.

The family of Richard A. "Dick" Kurtz created this Life Tributes page to make it easy to share your memories.