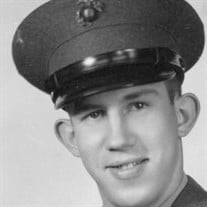 Ronald J. Bednarcik, 88, of Pompton Plains, formerly of Barnegat and Fairfield, passed away on January 1, 2022 after a long illness. Born at home in Elmwood Park to John & Agnes Bednarcik, he grew up in Clifton and graduated from Clifton High School in February 1952, and enlisted in the United States Marine Corp, obtaining the rank of Sergeant E-4 and served in the Korean War. Ron received the NJ Distinguished medal of honor. After his discharge, he worked for Manhattan Rubber Co. of Passaic NJ, where he met love of his life, Helen Dunning and they married in October of 1958. Ron attended Fairleigh Dickinson University at night under the GI bill and graduated with a Bachelor of Science degree in 1962. Ron then worked for Alpha Wire in Elizabeth NJ and then McCarter and English of Newark NJ where he retired in 2005. He loved spending time with his family, fishing, gardening, taking cruises and doing various projects around the house. Ron is survived by his wife of 63 years, Helen, his son James, his daughter Jodi (Chad) Underwood, his granddaughter Michele (Brian) McHugh, his grandson William & his wife Emily (Clayton) Grusovnik, his great grandchildren, Cian and Kiera McHugh, sister Janice Sebastian, sister-in-law Penny Burke and numerous nieces, nephews and cousins. He was predeceased by his parents, his sister Alice Bednarcik, brothers-in-law George Burke and John Sebastian and sister-in-law Betty LaGrotteria. Friends will be received Tuesday, January 18th 11AM-12PM at the Ippolito-Stellato Funeral Home, 7 Two Bridges Road, Fairfield. Memorial service to follow at noon and burial to take place at Hillside Cemetery, Horseneck Road, Fairfield. In lieu of flowers, a donation to your local Veteran's Association, Wounded Warrior Project or a charity of your choice. To watch the memorial service click the link below… https://fb.me/e/2PBSNpAao

Ronald J. Bednarcik, 88, of Pompton Plains, formerly of Barnegat and Fairfield, passed away on January 1, 2022 after a long illness. Born at home in Elmwood Park to John & Agnes Bednarcik, he grew up in Clifton and graduated from Clifton High... View Obituary & Service Information

The family of Ronald John Bednarcik created this Life Tributes page to make it easy to share your memories.