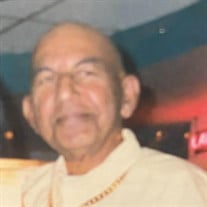 Vernon “Pages” Gibbons, 79, of Jersey City, NJ, passed away on Wednesday, April 14, 2021. He was born on November 9, 1941 to Iris and Alfred Gibbons in the countryside of Biche, Trinidad & Tobago. After Vernon Gibbons graduated from Secondary School, he became a proprietor of a taxi cab company in Trinidad. Vernon was passionate about working and loved what he did for a living. In 1979, Vernon met Joy in Port of Spain, Trinidad near her College. They went on to have five kids, Natasha, Sasha, Natalie, Shannon, and Noel. Vernon was an autodidact who possessed the capabilities of playing a piano by ear. He loved music, singing, and gathering with family and friends as much as possible. His sense of faith in God was strong and he connected to God by reciting the special Hail Mary Prayer. Vernon was predeceased by his parents, Iris & Alfred, his brother Roy, his son in law, Gregory and his son Noel. He is survived by his wife, Joy Gibbons and their four children, Natasha, Sasha, Natalie, and Shannon; his two brothers, John & Kenneth; his sister, Telma; his son in laws, Joseph Gatti and Nicola Attanasio; and his three grandchildren, Zoey, Giovanna and Gianluigi. Viewing and Religious Services will be held at the Caiola-Stellato Funeral Home located in Bayonne, NJ on Saturday, April 17th from 2:30-4:30 pm.

The family of Vernon "Pages" Gibbons created this Life Tributes page to make it easy to share your memories.