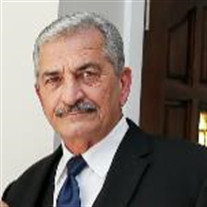 Vincent “Vinnie” John Casale, 74, of Fairfield, NJ formerly of Newark, passed away on Friday, October 8, 2021. Beloved husband of Judith Casale (nee Vieira) for 47 years. Loving father of Vincent Casale and his wife Carmen, and Maria Maiocco and her husband Thomas. Cherished grandfather of Kevin. Dear brother of the late Maria Portnajmer (late Casey), Louise Waters (late William), Loretta Graves (late Raymond), Diane Iacullo (Al), the late Frank Casale (Elaine), Joan Casale, and James Casale (Alessandra). He is also survived by many loving nieces, nephews, friends and neighbors. Vinnie served with the US Army in the Vietnam War, earning both a Bronze Star and Purple Heart. Upon returning from the war, he joined the NJ Division of Motor Vehicles and worked in the Highway Patrol Bureau. In 1984, he was sworn in as a member of the NJ State Police, Badge #3850. After working for the state of NJ for 31 years, he retired at 55 years old in 2002 as Staff Sergeant. After spending 1 year at home, he eagerly went back to the State Police working as a Traffic Analyst in the Traffic Division and has been there ever since. He dedicated his time to the Troop B Health and Welfare Fund, the Annual Troop B Christmas Party for the children, the Annual Scott Gonzalez Memorial Softball Tournament and Golf Outing, and many other events. From roasting chestnuts every winter to installing window treatments to being everyone’s handyman, Vinnie did it all and formed countless friendships along the way. He was larger than life, had a heart of gold and will be deeply missed. In his spare time, Vinnie enjoyed spending time with his family, his best friend Rocky (granddog) and traveling to Florida to his favorite vacation spot, Walt Disney World. In lieu of flowers, the family asks for donations to Vinnie’s favorite foundation, Tunnel to Towers.

The family of Vincent John Casale created this Life Tributes page to make it easy to share your memories.