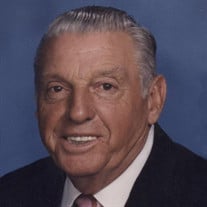 John Pentangelo 97, passed away on Sunday, September 16, 2018 at his former home in Fairfield, New Jersey surrounded by his family. He was born on March 23, 1921 in Harrison, NJ to Domenico and Agnella Pentangelo. He was the loving husband of the late Daisy Pentangelo and later in years married Audrey Banfield. John is the loving father of John Jr. who is married to Barbara Pentangelo and his dear daughters JoAnn Guarino and Donna married to Joseph Cifelli; the cherished grandfather of Alex (Trish) Cifelli, Sharri (Jay) Pratt, Gary Guarino, Michelle (Tim) Murdy, John Dominic Pentangelo, Chris (Claire) Guarino, Joseph (Chrissy) Cifelli, Anthony (Vanessa) Pentangelo, and Maria (Eric) Totaram; adored great-grandfather of Peyton and Christian Cifelli; Levi, Jonathon and Michael Pratt; Dominic and Alyssa Guarino; Tim and Vivienne Murdy; Jennifer Pentangelo; Quinn Guarino; Charlotte, Joseph and Angelo Cifelli; Giovanni, Victoria and Marisol Pentangelo; Eliana and Matteo Totaram. He served our country as a Corporal, in the US Army 8th Air Force, during WWII stationed in Stafford, England. In 2014, he was honored at a Space Coast Veteran World War II Honor Flight in Washington, DC. John and Daisy enjoyed many years in Fairfield. After John retired from the Star Ledger as a mechanic foreman, they moved to Barefoot Bay, Florida. In Florida, John was a member of the Italian American Club, Captain of the Bocce Team and enjoyed the game of golf and became an avid player. Relatives and friends may visit with the family at Ippolito-Stellato Funeral Home, 7 Two Bridges Road, Fairfield on Friday, September 21 from 4 to 8 pm and Saturday, September 22nd at 9 am followed by 10 am Mass at St. Thomas More Church. In lieu of flowers, donations may be made to Honor Flight Network: https://www.honorflight.org/ or to the American Society for the Prevention of Cruelty to Animals www.aspca.org. Condolences can be sent to www.stellatofuneralhomes.com

John Pentangelo 97, passed away on Sunday, September 16, 2018 at his former home in Fairfield, New Jersey surrounded by his family. He was born on March 23, 1921 in Harrison, NJ to Domenico and Agnella Pentangelo. He was the loving husband... View Obituary & Service Information

The family of John Pentangelo created this Life Tributes page to make it easy to share your memories.