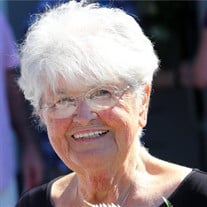 Patricia Ann Schauer, known to friends as "Pat" of Fairfield New Jersey passed away on December 24, 2019, surrounded by loved ones at the age of 85, at her home in Murrells Inlet, SC. A native New Yorker, Patricia was born on June 26th, 1934, on West 70th Street, NYC to Boyce and Lillian (McAndrew) Clancy. After finishing high School, Patricia went on to nursing school, until completion as an LPN and worked graveyard shift at St Vincent’s Hospital in lower Manhattan, as well as working during the day at Cab Services where she met her husband Peter Schauer in 1952. The minute Pat laid eyes on Pete from a distance she told her best girlfriend “I am going to marry that man someday”. Sure enough in June of 1959 they were married. In 1962 Pat left her nursing career to start her family and moved to Fairfield, NJ 1966 as her family was expanding. Every house hold has the “head of household” which was Peter, but everyone knew Pat was the “neck that controlled the head”. There was always two statements Pat would tell her children, one being “let’s not tell your father” which meant her children got away with something, or the more scarier statement “you just wait until your father gets home” then you really knew you were in trouble. Hence the “neck that controls the head”. Pat was her happiest raising their children and being a homemaker. Less strict on the children than Peter. For example, Peter would not allow the children to dunk their cookies in milk, however, when Peter would turn his head Pat would let the children have at it and dunk away like crazy. One of Pat’s weaknesses was sweets. There was not a sweet around that offended her, she loved it all. But one of her most favorite was Dunkin Hines chocolate icing. Pat would secretly hide a little container way back in the refrigerator so her children wouldn’t see it, and every so often she would sneak a little teaspoon in there for a quick scoop. Then one day the children figured it all out and questioned their mother “why is there always icing in the fridge, but never a cake”. Pat then realized the jig was up and her only response to her children was the biggest Irish smile, and the sparkle in her emerald green eyes, never a word in reply. Which remained an ongoing joke for years and the children would tease her about that quite often, and still her only response would be the beautiful smile and eyes. As the grandchildren came along the sweets in the house became even more plentiful. Pat felt it was her duty to always have sweets for the children just in case they stop in for a visit. Pats greatest accomplishment was raising four successful children, and watching her grandchildren grow. She was at her happiest when surrounded by her family. Pat also had a love for country music, Garth Brooks being her absolute favorite. But she had one special song that she even created a dance routine to which was “Girl On Fire” by Alicia Keys. She was always happy to perform this dance routine on request and she definitely was not shy about it. Please if you have a moment listen to that song and say a little prayer to Pat. Pat was predeceased by her husband Peter in 2018, survived by her four children, Karen Buchholz and husband Scott, Kevin Schauer and wife Teresa, Patti Drake and husband Michael, Peter Schauer and wife Jeni, as well as her six grandchildren Brianna, Courtney, Kelli, Tayler, Peter and Matthew. Also, her sister Maureen Zander, 6 nephews and 2 nieces. The family will receive friends in SC from 6:00-8:00 Thursday, December 26, 2019 at Burroughs Funeral Home, 3558 Old Kings Hwy, Murrells Inlet, SC 29576. A visitation will be held in NJ at Ippolito-Stellato Funeral Home, 7 Two Bridges Road, Fairfield, NJ 07004 Sunday, December 29, 2019 from 3:00-7:00pm. A church service will be held 10:00am Monday, December 30, 2019 at St. Thomas More Church, 12 Hollywood Avenue, Fairfield, NJ. Burial will follow at St. Mary’s Cemetery, Port Jervis, NY 12771. As a final request on Patricia’s behalf, the Schauer family asks: “In lieu of sending flowers, the next time you go out to dinner, have the desert first! That’s what Pat would have done.” Condolences may be made at www.burroughsfh.com or at www.stellatofuneralhomes.com. Burroughs Funeral Home of Murrells Inlet (843.651.1440) and Ippolito-Stellato Funeral Home of Fairfield, NJ (973.882.5588) are assisting the family with arrangements.

Patricia Ann Schauer, known to friends as "Pat" of Fairfield New Jersey passed away on December 24, 2019, surrounded by loved ones at the age of 85, at her home in Murrells Inlet, SC. A native New Yorker, Patricia was born on June 26th, 1934,... View Obituary & Service Information

The family of Patricia Ann Schauer created this Life Tributes page to make it easy to share your memories.

Patricia Ann Schauer, known to friends as &quot;Pat&quot; of Fairfield...