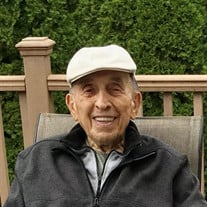 Admired Labor Leader of the 60's, 70's & 80's Frank Robert De Vito, 98, of Fairfield, New Jersey passed away on Friday, November 27 at home surrounded by family members. He was born in Brooklyn, NY on April 14, 1922, one of 12 children. Frank was a US Army veteran who served during World War II. An appliance salesman for TSS department stores once located throughout Long Island, NY. Frank became a Union Member with Local 169 of the Retail Clerks Union. He was a firm believer in fighting for the rights of fellow employees. Upon relocating to New Jersey with his family in the late 1950's, Frank took a position as a Union Representative with Local 1245 of the former Retail Clerks Union. He became president of Local 1245 in 1960. Frank achieved two of his major goals as President in 1963, "Equal pay for men and women in the Supermarket Industry" and an "Employer paid pension plan for Supermarket Workers". That pension plan stands strong to this day, providing a good pension for thousands of supermarket retirees and their families. During his time as Local 1245 President, Frank also served as a Vice President of the NJ State AFL-CIO and a s President of the UFCW District Council of New York & New Jersey, which represented approximately 110,000 supermarket workers in both states. Frank was chosen to represent the UFCW International Union for Foreign Studies and had the privilege to visit several countries to exchange ideas to further the Labor Movement in the United States. Frank retired as President of the UFCW Local 1245 in 1985 and founded and successfully operated Benefit Plan Administration of New Jersey, which administered multi-employer health, pension and other employee benefit funds. Frank was an avid jogger who rarely missed a day of his three-mile run. When he had spare time, he was equally passionate about making his own wine, from picking and squeezing the grapes, to bottling and labeling the finished product with three of his closest friends. Frank was predeceased by his wife Sue of 70 years. Frank is survived by his four children, Donna Colucci & husband Vincent of Lincoln Park, NJ; Vinnie De Vito & his wife Debbie of Fairfield, NJ; Gina De Vito of Boonton, NJ and Michael De Vito of Fairfield, NJ. He is also survived by his six grandchildren, Jaime Schamble (Lou), P.J. (Monita), Brittany, Tiffany, Michael, and Matthew (Catherine) De Vito and four great granddaughters, Ella, Kaylee, Mikenna and Avery De Vito Our thanks to Krystyna and Sandy who as Frank's caregivers made his last few years living at home, comfortable as well as enjoyable. Due to the Covid-19, funeral services will be held at Ippolito-Stellato Funeral Home and will be private for Frank's immediate family. A "Celebration of Life" will be held in 2021 when Covid-19 restrictions are lifted and gathering is once again permitted and safe. In lieu of flowers, we ask donations may be made to the West Essex First Aid Squad, PO Box 662, West Caldwell, NJ 07007.

The family of Frank Robert De Vito created this Life Tributes page to make it easy to share your memories.