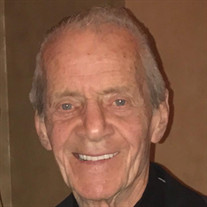 With great sadness we announce the passing of Joseph “Joe” Mullins, 82, on December 16,, 2019. Beloved Husband of 50 years to Mary Lou Mullins (Valvano), Devoted Father to Pattie, Terry and Louis. Cherished “Poppy” to Maria, Ronnie, Dana, Christie Lyn, Nicolas and great-grandchildren Alyssa, Dominic, Madison, RJ and Breelyn. Also deeply missed by his fur baby, Jo-Jo. A longtime resident of Lyndhurst, NJ, Joe was a graduate of Fairleigh Dickinson University (1969) and worked at Benedict Miller for 30 years. You may also remember running into him at the Garden Deli where he had a part time gig. He was a decorated runner on the Kearny High School track team and completed the NYC Marathon in 1981. He was an avid reader and a lover of music, never missing an opportunity to sing “Unforgettable” to his wife or play the harmonica for his family! He was also a dedicated parishioner and Usher at St. Michael the Archangel Roman Catholic Church. Joe was beyond selfless, one of a kind, of the strongest character, and truly lived his life his way. We would like to thank everyone for the continued prayers, as they have been answered and Joe is now at peace in his eternal resting place. Funeral Saturday 9AM from the Ippolito-Stellato Funeral Home, 425 Ridge Road, Lyndhurst. Funeral Mass 10AM St. Michael's R.C. Church. Interment Holy Cross Cemetery. Friends will be received Friday 3-7PM. In lieu of flowers donations may be made to a charity of your choice.

The family of Joseph J. Mullins created this Life Tributes page to make it easy to share your memories.

With great sadness we announce the passing of Joseph “Joe” Mullins,...