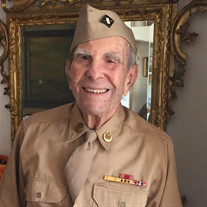 Ovid Dante Di Fiore, 100, passed peacefully on Wednesday, February 6, surrounded by family. He was the son of Giulio Cesare Di Fiore and Concilia (Mascolo) Di Fiore, and was born in the Belmont section of the Bronx NY. Ovid married his beloved wife Mae (“Mickey”) Lauricella in 1951 and they had two children. First born was daughter Ann Stratton (married to husband Dan, and their daughter Danielle) and second born was son Gerard (married to wife Patti, and their sons Austin and Ian). Mickey predeceased Ovid in 1990. Ovid was a devoted husband, a loving and involved father and grandfather. He was a person of tremendous character and amazing virtue. He was known for his endless patience, his kind and gentle nature, his humility and selflessness and his unconditional love. His children returned his love and devotion throughout his life. He was also disciplined and quietly reverent, and never uttered unkind words about anyone. Perhaps his most defining characteristic was his tenacity, which he displayed until God brought him back to be with him in Heaven. He was deeply involved in the lives of his three grandchildren with a level of energy and enthusiasm usually reserved for a younger man. His adoring grandchildren often turned to him for guidance and advice. Ovid was one of six children, his siblings included his brother Julius Jr. and his sisters Emma, Helen, Blanche and Marie, who is his sole surviving sibling. Ovid was the loving uncle of many nieces and nephews. He attended Regis High School in Manhattan and graduated during the Great Depression. He served with distinction in the US Army during WWII and spent four years in Australia, New Zealand and the Philippines, as a signal corps photographer and later on in counterintelligence. Upon his return in 1945 he used the GI bill to attend Pace College at night while working days in the photography field. His book “Melbourne to Manila” was written and published when he was 90 years old and is a memoir of his service in WWII. Friends will be received Sunday 2-4 & 7-9PM at the Hunt-Stellato Funeral Home, 1601 Palisade Ave, Fort Lee. Funeral Monday 9AM from the funeral home. Funeral Mass 10AM St. Therese of Lisieux Church, Cresskill. Interment Madonna Cemetery. Donations may be made to Regis High School in Manhattan at www.regis.org.

Ovid Dante Di Fiore, 100, passed peacefully on Wednesday, February 6, surrounded by family. He was the son of Giulio Cesare Di Fiore and Concilia (Mascolo) Di Fiore, and was born in the Belmont section of the Bronx NY. Ovid married his beloved... View Obituary & Service Information

The family of Ovid Dante Di Fiore created this Life Tributes page to make it easy to share your memories.