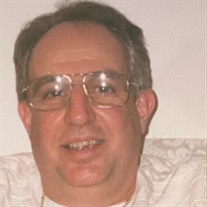 It is with deep sorrow and much love that we mourn the peaceful passing of Robert (Bobby) Ruggiero, of Fairfield, NJ, on March 31, 2021, at the age of 74 years. Bobby was born in Montclair, November 9, 1946, to Angela (Grasso) and Michael Ruggiero, Sr. He was one of five children raised in Montclair and Bloomfield. To say he was the family favorite, is an understatement. His kindness, loyalty, and concern for others was evident in how he lived each day of his life. Always the helper, and generous with advice and support. Bobby graduated from Bloomfield High School in 1965. There he met the smart, and beautiful, Mary Kavlick, who reportedly did all of his homework. Bobby was quick to recognize a good thing, and shortly after high-school they were married. Bobby loved music and was a talented drummer. In high school he formed a band, Reno and the Gamblers, who went on to play back-up for The Supremes when they performed at Dodd’s in Orange. His love for all things “made from wood “went beyond his favorite drumsticks. Bobby followed in the footsteps of his favorite uncle and mentor, Felice (Willie) Ruggiero and became a Union Carpenter. He completed a five-year apprenticeship and worked for Local 1342 for 10 years. . In 1978, he formed Chelsea Construction, with his friend and business partner, Nick Stefaneli. Together, they built a vibrant business, rich in memories, and incredible stories. In addition to being a fine craftsman and talented musician , Bobby loved the horses and the NY Yankees. Always the optimist, he religiously purchased his daily lottery tickets from his “lucky” candy store. Bobby is survived by his wife of 54 years, Mary (Kavlick) Ruggiero, his two children: Dawn Dasaro and her husband Michael of Fairfield, N.J, and Robin Ruggiero, of Fairfield, N.J.; four grandchildren that were the center of his universe and made him extremely proud Eddy, Robert, Sophia and Michael. His sister Joanne Fletcher, Mildred Ridolfo, and his brother Michael, and numerous nieces and nephews. He was predeceased by his parents, and his sister, Marion (Ruggiero) Cueli. Due to COVID restriction a private funeral mass will be held on April 10th for family and close friends. In lieu of flowers, the family is requesting donations be made to: Leukemia & Lymphoma Society: https://donate.lls.org/lls/donate To Watch "Bobby's" Funeral Mass live click the link below https://fb.me/e/3qCqD4JOL

It is with deep sorrow and much love that we mourn the peaceful passing of Robert (Bobby) Ruggiero, of Fairfield, NJ, on March 31, 2021, at the age of 74 years. Bobby was born in Montclair, November 9, 1946, to Angela (Grasso) and Michael Ruggiero,... View Obituary & Service Information

The family of Robert "Bobby" Ruggiero created this Life Tributes page to make it easy to share your memories.

It is with deep sorrow and much love that we mourn the peaceful...