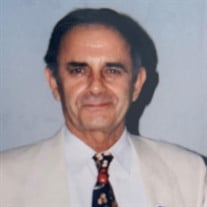 Albert C. Belfiglio, age 86, of Fairfield, New Jersey, died Wednesday, Dec 18, 2019. He is survived by Virginia Nardone of Fairfield, New Jersey, his partner and wife of 46 years; his daughter, Tracey Hebert of Aubrey, TX; his sisters, Lucille Cornacchia, of Fanwood, NJ, Matilda Lombardi of Baldwin, NY, and his brother, Ronald Belfiglio & wife, Merry Carol, of the Bronx, NY. Also surviving are his brothers-in law David Kentner & wife Virginia of Columbus OH, and Dr. Donald Kentner & wife Jackie of Wayne, NJ; 22 nieces and nephews, and 35 grand nieces and nephews. He was predeceased by his brother Anthony and wife Josephine of Kingston, NY. Albert served in the National Guard of NY from 1949-1954, then in the U.S. Army as a Military Policeman from 1954-1956.. After the army he studied at the American Theater Wing and HB Studio in NYC and for over 2 decades performed in and directed myriad theatrical and film productions primarily in the NYC area. He was a life-long member of both Actors’ Equity Assoc and Screen Actors Guild. In 1973 he established the Metropolitan Furniture Restoration business of which he was sole owner and proprietor. He closed his business in 2009. Equally as defining in his life was his long standing ‘hobby’ in antique auto restoration for which he garnered (ca. 1986) a First Senior trophy (in the 194041 Judging Class) at the esteemed annual fall national restored-autos meet in Hershey, PA). A second and possibly more known ‘hobby’ was as ‘chef’ in his own kitchen. Being asked to dine at Al’s was a much desired invitation. His Italian meatballs were considered by many family members and friends as the best to be found anywhere. Known for being non-contentious and kind to all he encountered, Albert was beloved by all who knew him and will not soon be forgotten. A Memorial Celebration will be held on Saturday, February 1st, 2020, at the Federated Church of Livingston at 14 W Mt Pleasant Ave, Livingston, NJ, from 1:00 to 5:00 PM. All are welcome to join in celebrating Al’s life.

The family of Albert C. Belfiglio created this Life Tributes page to make it easy to share your memories.