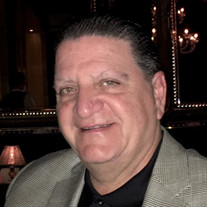 Augie Urgola – a man who devoted his life to the happiness of his family and friends. August Anthony Urgola, age 67, died on Thursday, March 26, 2020 at his home in Lyndhurst, NJ. He is survived by his wife Lauren; daughter, Christin Vespi, and her husband, Damon; son, John, and his wife, Hemisha; grandchildren, Giovanna, Michelangelo, Adrianna, Marcello, Sia and Leila; his brother, Peter, and his wife, Arlene; brother, Anthony, and his wife, Loretta; and late brother, Vincent, and his wife Arlene; as well as many uncles, aunts, cousins, nephews, nieces, and countless friends. ‘Augie’ was born and raised in Harrison, NJ to Anthony and Louise Urgola, but lived the greater part of his life as a resident of Lyndhurst, NJ. After graduating from Harrison High School, he began a long and meaningful career with Prudential that spanned over 40 years. Starting in a mailroom at 19 years old and reaching the level of Vice President, Augie was the personification of the ‘American Dream.’ He was a true example of how talent could come from anywhere, and that professional success could be achieved through a sense of humanity and integrity. Prudential was more than a company to him – it was part of who he was – and this was evident in his commitment to both the colleagues he helped and the organization at large. As shared by many of his former Pru Family, “Nothing would give him more joy than to see you grow and succeed, and he would be there helping and guiding you every step of the way…There will never be another Augie.” Augie was a lover of all sports – especially the Yankees, Giants, and Horse Racing – but even this paled in comparison to his love of watching his grandchildren compete in their many games, recitals, and competitions. He was an engaging storyteller and the person who everyone wanted to tell jokes at parties. He could recall any Honeymooner’s episode from memory, and could explain the meaning and origin of any Beatles song. To know him was to know what true selflessness and generosity was. But these qualities were merely an extension of what truly drove him – the happiness of his family and friends. While he has left behind many of these family and friends in sadness, he would hope that we all cling to our most joyous memories of him, his most impactful lessons, and above all that we enjoy our lives, because, as he often said, “It’s a Beautiful Thing.”

Augie Urgola &#8211; a man who devoted his life to the happiness of his family and friends. August Anthony Urgola, age 67, died on Thursday, March 26, 2020 at his home in Lyndhurst, NJ. He is survived by his wife Lauren; daughter, Christin... View Obituary & Service Information

The family of August A. Urgola created this Life Tributes page to make it easy to share your memories.

Augie Urgola – a man who devoted his life to the happiness of...