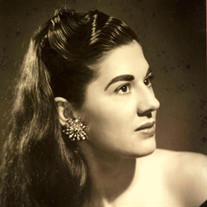 Carmen Fernandez (née Gonzalez) of Pueblonuevo, Córdoba, Spain passed away on International Women’s Day, Tuesday, March 8, 2022. She was 87. Carmen died, as she lived much of the past 25 years, in the loving care and embrace of her devoted daughter and caretaker Camelia Fernandez Eckstein. Carmen dedicated much of her professional career to manufacturing menus for various restaurants and to making art sleeves for galleries in New York City. She spent the first twelve years of her life in Andalucía during the Spanish Civil War — facing the difficulties of food insecurity in bomb shelters. These formative experiences helped shape Carmen into becoming a selfless and deeply caring woman. Carmen is predeceased by her parents Gaspar Gonzalez and Carmen Gonzalez. She was the youngest of six children. Manuel Gonzalez, Anita Marquez, Gaspar Gonzalez, Gaspar Vincente Gonzalez, and Ralph Gonzalez. All of whom have already passed. All of whom Carmen remembered every night when she air-kissed their pictures above her recliner. When Carmen first came to the United States, she worked many odd jobs to learn English and to help her family make ends meet. While working as a housekeeper in an apartment in New York City’s Upper East Side, she discovered two of her early passions: cleaning and CBS news. Carmen took pride in the meditation of cleaning, and loved keeping abreast of both domestic and worldly politics. She lived what it means to be American. She personified the American Dream. She embodied the immigrant spirit of hard work, so that her child and grandchildren could have better and easier lives. Carmen was a fighter. In 1996, she was diagnosed with stage 4 lung cancer. Multiple doctors told her she only had three months to live. Nonetheless, she never let anyone’s assessment of her life determine her outlook. Tenacious doesn’t even begin to describe her attitude. She was a believer. She believed in herself, and those she loved until the end. In 2006, the insurance company Horizon Blue Cross Blue Shield made a national commercial about Carmen’s cancer battle. Eight years ago, in order to save her life, Carmen underwent an above-the-knee amputation of her left leg. She was never deterred, only humbled by the fact she would be able to be present for more of life’s milestones. Carmen cherished her daughter Camelia and her three grandchildren, Noah, Olivia Carmen, and Jordan. They were her reason to keep fighting, her deepest joys. Carmen is survived by her dear sister-in-laws Alma Gonzalez and Francis Gonzalez. Her nieces Mari Carmen Gonzalez, Janine Sheafer and Cheryl DePinho. And, her nephews Steven Gonzalez and Manny Gonzalez. As well as numerous great nieces and nephews. May Carmen’s memory be for blessing. A funeral service and eulogies will occur on Friday, March 11, 2022, at 12:30PM at the Holy Cross Chapel Mausoleum, 340 Ridge Rd, North Arlington, NJ 07031. In lieu of flowers, donations may be made to the Jose Andres World Central Kitchen, https://wck.org/ 200 Massachusetts Ave NW, 7th Floor, Washington, DC 20001.

Carmen Fernandez (née Gonzalez) of Pueblonuevo, Córdoba, Spain passed away on International Women&#8217;s Day, Tuesday, March 8, 2022. She was 87. Carmen died, as she lived much of the past 25 years, in the loving care and embrace of her devoted... View Obituary & Service Information

The family of Carmen Fernandez created this Life Tributes page to make it easy to share your memories.