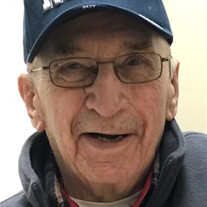 Vaughan, David, 88, of Palisades Park, New Jersey, passed away peacefully at home surrounded by family on Saturday May 4, 2019. Beloved husband of Anne Marie Vaughan. Cherished father of David, Joanne, Keith and Jamie. Dear father-in-law of Amy. Loving grandfather of Julia Anne, Erin, Kerry and David III. Adored great grandfather of Michael. Dave will also be missed by his beloved maltese – Ollie Boy. Son of Alice Sullivan and James Vaughan. Dave grew up in Greenwich Village, graduating from All Hollows in the Bronx, NY and attended NYU. In 1949, Dave enlisted in the Navy and served four years aboard the destroyer – the USS Gyatt 712 – reaching the rank of Petty Officer Second Class. After earning an Honorable Discharge, Dave returned to Greenwich Village in 1953 where he courted and married the love of his life – Annie Girl - with a marriage in June, 1954. Dave and Anne originally lived in Weehawken before moving to Palisades Park. Dave was always a proud Navy Veteran while also being active with the Veterans Of Foreign Wars. During the Bicentennial year, Dave was an All State Commander of VFW Post 4365. For over 55 years Dave worked as a textile salesman in New York City’s Garment District with many of the biggest names in fashion as his customers. Dave’s outgoing personality and honesty earned the respect of all of his clients. A devoted and loving father Dave especially enjoyed watching and coaching his kids and grandkids as they played High School and recreational sports. Dave developed a strong love of the outdoors whether it was fishing or hunting or spending time with his friends and family. Dave was loved by one and all. Friends will be received Tuesday from 4 to 8:30PM at the Stellato Funeral Home, 1601 Palisade Avenue Fort Lee, NJ (201-944-1202). A Funeral Mass is planned for Wednesday at 11AM at Saint John’s The Evangelist – 470 Broad Avenue in Leonia, NJ (201-947-4545). Cremation Private. In lieu of flowers, please consider a donation in David Vaughan’s memory to ECAA, PO Box 55071, Boston MA 02205 or The DeGregorio Family Foundation, PO Box 236, Pleasantville, NY 10570. Valet parking will be available at the funeral home

The family of David Vaughan created this Life Tributes page to make it easy to share your memories.