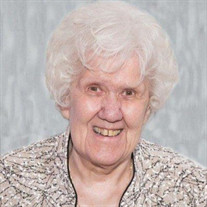 Doris Lorraine Murtha (Kruse), 87, of Lyndhurst, passed away peacefully on July 22,2021. Doris was born in Hoboken, NJ in 1934 and graduated from A.J. Demarest High School. She married her long-time sweetheart, John, in 1953 and moved to Lyndhurst in 1957. She was employed as a biller-typist and was a proud Teamster. For many years, Doris had been active in the Lyndhurst Elks Emblem Club, and she held several offices including President from 2005 to 2006. Doris was known for being a terrific dancer, an accomplished cook, a skillful cardplayer, and a person who loved to laugh. Doris endured many hardships. She lost her beloved parents, George and Helen Kruse (nee Roggerman) before she was 19 years old. She also suffered the loss of two infants. She lost her cherished husband of 56 years, John Joseph Murtha, Sr., in 2010 and her son Robert in 2015. She will always be admired for how she bore up under such heavy burdens. Doris was a loving mother to Lorraine (husband Jack Zahn), John Jr. (husband Charles Buck), Robert, William, and Bryan, and a cherished grandmother to Stephen, Kelly, and Jacqueline Zahn, Andrew and Christine Murtha, and Audrey and Emily Mae Murtha, and a loving great-grandmother to Patrick Murtha. She was also a dear sister to her two older brothers, Warren and George, who pre-deceased her. Interment will be held at on July 26 at 11:00 am at Crest Haven Memorial Park, 750 Passaic Ave, Clifton, NJ followed by a repast at Biagios, 299 Paramus Road, Paramus, NJ. To keep safe those who are vulnerable, we request that those who have not been Covid vaccinated have a Covid test prior to the interment and repast. Wearing masks is encouraged. In lieu of flowers, donations may be made in Doris’ name to Amyloidosis Support Groups Inc., https://www.amyloidosissupport.org/

Doris Lorraine Murtha (Kruse), 87, of Lyndhurst, passed away peacefully on July 22,2021. Doris was born in Hoboken, NJ in 1934 and graduated from A.J. Demarest High School. She married her long-time sweetheart, John, in 1953 and moved to Lyndhurst... View Obituary & Service Information

The family of Doris Lorraine Murtha created this Life Tributes page to make it easy to share your memories.