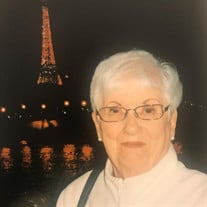 Dorothy Menist (Dilger) passed away peacefully in her home surrounded by loved ones, on February 3, 2020 ten days shy of her 86th birthday. Dorothy was born February 13, 1934 at Holy Name Hospital in Teaneck. She lived her entire life in Edgewater, where her family’s roots date back to 1906. Dorothy’s parents operated Dilger's Butcher & Grocery store at 602 Undercliff Avenue for 40+ years. She was one of five children and is survived by her loving sisters Constance Hughes and Ethel Scamporino and predeceased by her brother Daniel Dilger, Jr. and her sister June Dayock. Dorothy's first job was as an administrative assistant at RCA in Rockefeller Center in New York City. After Dorothy got married to Garrett Menist in 1954, she stayed at home to raise their 4 children. Dorothy later rejoined the work force after her husband Gary passed away in 1983. She worked at United Jersey Bank in Customer Service before retiring to enjoy her golden years. With her re-found freedom, she enjoyed spending time with her family and friends and traveling to such places as Ireland, Scotland, Paris, Mexico, Hawaii, Aruba as well as enjoying several winters in Florida as a snowbird. She often visited Las Vegas to spend time with 2 of her sons & their families, who reside there. Dorothy’s world revolved around her family and is survived by her children, Gary and his wife Julie (Robarts), Glenn and his wife Lorelei (Loney), Gregory and his wife Gail (Bartoszek) and Alison Chaneski and her husband Robert (Bobby). Dorothy also leaves behind her 8 grandchildren, who she loved to brag about to anyone that would listen: John and his wife Sara (Rees), Daniel, Jeremy, Celine, and Bridgette Menist; Claudia, Robert, and Melina Chaneski. Dorothy also leaves behind her special companion George Meagher who she enjoyed time with later in her life. Dorothy & George had a routine every week which you could set your clock by. Weekends were for her and George: a local diner for breakfast, Mass, dinner out, and Movies on Sunday afternoon. She was an active parishioner of Holy Rosary Church in Edgewater, where you could usually find her and George together at the 5:30 Saturday Mass. Dorothy had a beautiful voice, which was evident in church as she sang hymns, or singing along to songs on the car radio. She also never left the house for church without a bag of goods for the local food pantry. Dorothy was a member of the Palisade's Park Swim club, where she would spend time with her girlfriends, catching up on family, grandchildren and local news while sitting under a shady tree or keeping cool in the pool. Through this annual ritual she established lifelong friendships that exist to this day. Dorothy's private caregivers (Anna, Rosa, and Tina) helped keep her safe and comfortable over the past year and treated her with loving care, compassion, and respect. Holy Name Hospital Hospice organization and their resources worked tirelessly to make sure Dorothy was comfortable as well as checking in with the family to see how they were doing. Her Case Worker Imane's dedication and patience gave great comfort to the family throughout Dorothy's care and in her final days. Visitation for family & friends will be held on Thursday, February 6, 2020 from 4:00pm - 8:00pm at Hunt-Stellato Funeral Home located at 1601 Palisades Avenue, Fort Lee. Funeral Mass will take place at Holy Rosary Church located at 365 Undercliff Avenue, Edgewater on Friday, February 7 at 10:00am. Interment will follow at Fairview Cemetery in Fairview, New Jersey. In lieu of flowers, memorial contributions may be made to Holy Rosary Church in Edgewater or Holy Name Hospital Hospice.

Dorothy Menist (Dilger) passed away peacefully in her home surrounded by loved ones, on February 3, 2020 ten days shy of her 86th birthday. Dorothy was born February 13, 1934 at Holy Name Hospital in Teaneck. She lived her entire life in Edgewater,... View Obituary & Service Information

The family of Dorothy I. Menist created this Life Tributes page to make it easy to share your memories.

Dorothy Menist (Dilger) passed away peacefully in her home surrounded...