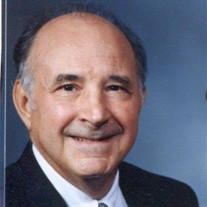 Frank M. Chillemi of Fairfield passed away on August 24, 2019, one day after his 89th birthday, with his devoted wife, daughter, and granddaughter at his side, at St. Barnabas Medical Center. He had been hospitalized on July 5 after a stroke, with multiple organ failure developing thereafter. The second of three sons of the late Stephen and Carmella (LaFerrara) Chillemi, Frank spent his childhood in an Italian-American neighborhood in Newark during the Great Depression. His family of five lived with his maternal grandfather and three unmarried aunts, who promptly gave Frank the nickname “Buddy” because of their fondness for the then-popular movie star Buddy Rogers. When Frank’s older brother got married, the household expanded to include his brother’s wife and growing family that reached five children. Frank showered his nieces and nephew with his love, time, and special gifts, and they in turn idolized their Uncle Buddy. The extended Chillemi family lived in a series of multi-family apartments throughout Newark, moving when circumstances dictated. The scarcity of sufficient food, housing, and resources forced Frank to help his family in many ways, including pre-threading a hundred sewing needles each night so that his mother would not have to strain her eyes at the factory where she worked. He grew up quickly, and these challenging experiences in his early years taught him the great value of family, friends, and perseverance. The uncertainty of those times no doubt shaped Frank’s goal of creating a secure and happy life for himself and his eventual family. While at 14th Avenue Elementary School in Newark, Frank’s teachers were impressed with his aptitude and motivation, and encouraged him to prepare for college. But higher education was a luxury his family could not afford. He attended Bloomfield Vocational-Technical School, where he played football and trained to become an electrician like his father. Upon high school graduation, Frank accepted a position at General Electric (Newark), where he worked until he joined the U.S. Navy, which he hoped would provide a stepping stone toward a better life. Earning the highest score on the test given to his Navy recruiting class, Frank was given the privilege of selecting among several assignments for his tour of duty during the Korean War era. He chose to become a C.B. (“SeaBee” - a member of the Civilian Battalion), so that he could remain near his family and visit them on weekends. He served as a Navy electrician working out of Davisville, Rhode Island and Bainbridge, Maryland. The SeaBee mottos encapsulated Frank’s strong work ethic: "We build. We fight… CAN DO… The difficult we do now, the impossible takes a little longer." Upon his discharge from the Navy, Frank was finally in a position to enroll in Newark College of Engineering (now NJIT), from which he graduated with a Bachelor of Science degree in Electrical Engineering. He then began his long career as an engineer at Western Electric (Newark), which later became AT&T, Lucent, and Nokia, as Frank was promoted through the ranks of management. Frank was thrilled to marry Carmella “Millie” DiPace in 1963 and they welcomed their first and only child, Francine, on the day of their first wedding anniversary in 1964. Frank and Millie proudly custom-built the home of their dreams in 1967-68 in Fairfield and enjoyed a fulfilling life there. Frank was a devout Catholic, sitting with his family in the same spot at St. Thomas More Church in Fairfield at weekly mass for 51 years. His faith brought him great comfort, especially at the end of his life. He was detail-oriented and meticulous, genuine, generous, and thoughtful. Although he was a gentle man at his core, he also displayed great strength and was passionate about his beliefs. He had a wealth of knowledge about varied subjects, much of his information coming from reading the Newark Star-Ledger in its entirety most days of his adult life, routinely completing at least one of the paper’s crossword puzzles. Frank’s deep interest in the environment and the new construction affecting his town, particularly flood-prone areas, led to his service on the Fairfield Planning Board upon appointment by Mayor Anna Marie Rotonda in the 1990’s. Frank was the beloved best friend and husband of 56 years of Carmella “Millie” Chillemi; the cherished father, mentor, confidante, and inspiration to Francine M. Chillemi; and the adored grandfather of Christina Kurtz, who never failed to add a sparkle to his eye and a smile to his face. He was the dear brother of Stephen Chillemi, Jr. of Toms River and the late Salvatore Chillemi. Frank was loved and respected by many extended family members and lifelong friends. “The boys” from the Fairmount Avenue Social Club in Newark remained his close brotherhood for 80 years, from their days playing ball on city streets, through the ups and downs of life and death. Frank cited these friendships among his greatest accomplishments and was very proud of the fact that these men had “come from nothing” and had all become successful in their own way. Viewing will be Thursday, August 29, from 4 to 8pm at Ippolito-Stellato Funeral Home, 7 Two Bridges Road, Fairfield. Funeral mass will be Friday, August 30, at 10am at St. Thomas More Church, Fairfield, followed by burial at Gate of Heaven Cemetery, East Hanover. In lieu of flowers, donations may be made to St. Jude Children's Research Hospital, wwwstjude.org, or Boys Town, www.boystown.org.

Frank M. Chillemi of Fairfield passed away on August 24, 2019, one day after his 89th birthday, with his devoted wife, daughter, and granddaughter at his side, at St. Barnabas Medical Center. He had been hospitalized on July 5 after a stroke,... View Obituary & Service Information

The family of Frank M. Chillemi created this Life Tributes page to make it easy to share your memories.