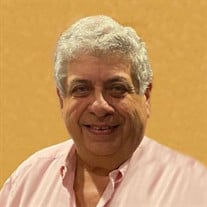 George M. Volpe, Sr., 82, of Fairfield, New Jersey formerly of Brooklyn, New York, passed away on Monday, March 29, 2021. Beloved husband of Grace Volpe (nee Calamito) for 58 years. Loving father of George Jr. & his wife Evelyn Volpe, Mark & his wife Sandy Volpe, and Christine (nee Volpe) & her husband Joseph Tavares. Cherished grandfather of Nicole Tavares and the late Joey Tavares. George was born and raised in Brooklyn, New York where he grew up with many loving cousins, his mom and his brother. George moved to Lyndhurst, New Jersey after meeting his wife and starting a family. After graduating college with a bachelor's degree in chemistry, George went on to serve in the military as a medic before continuing his career in the flavor and fragrance industry. George was a genuine soul who greatly impacted the lives of all who knew him. Strong-willed, stubborn and dedicated, George started his own company at age 40. With a wife and 3 kids to support, George took the risk and turned his vision into a reality. Now, more than 40 years later, Penta International is a family owned and operated business still going strong to this day. The most important thing to George was family. He loved his wife, kids and grandkids more than anything and always made sure everyone was taken care of. George was at his happiest when his family was together. Whether it was going on annual vacations, going down to the Jersey shore in Wildwood, New Jersey, celebrating special occasions or simply having dinner together after work, if the family was together, George was smiling. George's caring heart and quiet generosity extended beyond family to friends and even strangers. He helped those around him without question and without ever expecting anything in return. George was a force to be reckoned with, a truly good man and his larger than life spirit will live forever in the memories of all who knew him. In addition to flowers, donations can be made to Joey's House, PO Box 1077, Caldwell NJ 07007, a foundation in honor of George's beloved and only grandson, Joey Tavares. Funeral Wednesday, April 7th, 9AM at the Ippolito-Stellato Funeral Home, 7 Two Bridges Road, Fairfield. Funeral Mass 10AM St. Thomas More R.C. Church. Entombment Gate of Heaven Mausoleum. Friends will be received Tuesday, April 6th, 4-8PM. To view George’s Funeral Mass live, click the link below. https://fb.me/e/JuCskpmh

The family of George M. Volpe, Sr. created this Life Tributes page to make it easy to share your memories.