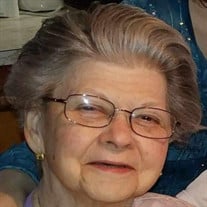 Isabel Pazos-Ayerbe (June 25, 1929 – October 17, 2020) Isabel Pazos-Ayerbe, 91, passed away peacefully in her sleep at 3:30 PM on Saturday, October 17, at home under hospice care for the past 26 months, as a result of Alzheimer's Disease for the past 7 years. She was born in La Habana, Cuba, to the late Jose Pazos-Nuñez and Isabel Ayerbe-Queiro de Pazos. Never marrying or having children, she devoted her life to caring for her beloved parents, until they too were promoted to Glory. She was an avid fan of her favorite Telenovelas, her love for her family, and children, who in her later years after retiring from Pre-Stype, a printing company, and her parents passing, she devoted her time to babysitting many children from different families. During her late brother, Jose Pazos-Ayerbe's infancy illness, requiring uprooting to a colder climate environment, her Spanish roots brought her, parents and brother to Spain, until it was medically safe for him to return to Cuba, where she spent most of her younger years. At a very young age, she, along with her parents, had a beautiful farmhouse built in Cuba, which afforded them close to 100% farming sustainability, cultivated daily by her Father, while she worked in an office. This all changed in 1959, when the Castro regime destroyed all private sector businesses, implementing Communism. After living a very comfortable life, they were forced, as many Cubans, to relinquish all private properties, businesses and assets, and to reinvent the art of survival. Losing her job upon filing for exile, resulted in years living off the land her Father cultivated so well. During this very difficult time, her Brother and Sister-in-law endured the heart-wrenching decision to allow their only daughter to exile to Spain with her and her parents in March, 1969, with the very realistic, fearful possibility of never reconnecting, yet, hoping of eventually reuniting one day in the United States; a painful separation, lasting until July, 1970. While trying to learn the language, acclimating to the American way, and starting with literally nothing, she worked for many years, until retiring in 1987, after her Father passed and devoted her time tending to her sick Mother, until her death in 1991. A scare with breast cancer in 2008, which resulted in a mastectomy, and the blessing of being cancer-free for her remaining 12 years until her death. She achieved the American Dream, devoting her life to her family, faith and hard work. She leaves her Sister-in-law Julia Pazos, niece Mayra Enquist and husband Dean, all of Lyndhurst, NJ; many cousins, and lifelong wonderful neighbors and friends. Donations can be made to the Alzheimer's Association at https://act.alz.org Funeral services / internment are private under the direction of Ippolito-Stellato Funeral Home, 425 Ridge Road, Lyndhurst, NJ 07071, followed by internment at Holy Cross Cemetery and Mausoleum, 340 Ridge Road, North Arlington, NJ 07031, on Thursday, October 22, 2020 at 1:30 PM.

The family of Isabel Pazos-Ayerbe created this Life Tributes page to make it easy to share your memories.